A Joy For Ever (And Its Price in the Market) 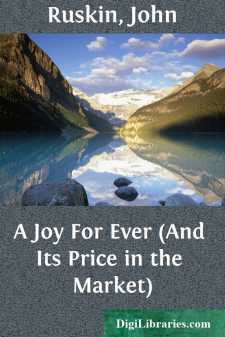 LECTURE I. THE DISCOVERY AND APPLICATION OF ART.

1. Among the various characteristics of the age in which we live, as compared with other ages of this not yet very experienced world, one of the most notable appears to me to be the just and wholesome contempt in which we hold poverty. I repeat, the just and wholesome contempt; though I see that some of my hearers look surprised at the expression. I assure them, I use it in sincerity; and I should not have ventured to ask you to listen to me this evening, unless I had entertained a profound respect for wealth—true wealth, that is to say; for, of course, we ought to respect neither wealth nor anything else that is false of its kind: and the distinction between real and false wealth is one of the points on which I shall have a few words presently to say to you. But true wealth I hold, as I said, in great honour; and sympathize, for the most part, with that extraordinary feeling of the present age which publicly pays this honour to riches.

2. I cannot, however, help noticing how extraordinary it is, and how this epoch of ours differs from all bygone epochs in having no philosophical nor religious worshippers of the ragged godship of poverty. In the classical ages, not only were there people who voluntarily lived in tubs, and who used gravely to maintain the superiority of tub-life to town-life, but the Greeks and Latins seem to have looked on these eccentric, and I do not scruple to say, absurd people, with as much respect as we do upon large capitalists and landed proprietors; so that really, in those days, no one could be described as purse proud, but only as empty-purse proud. And no less distinct than the honour which those curious Greek people pay to their conceited poor, is the disrespectful manner in which they speak of the rich; so that one cannot listen long either to them, or to the Roman writers who imitated them, without finding oneself entangled in all sorts of plausible absurdities; hard upon being convinced of the uselessness of collecting that heavy yellow substance which we call gold, and led generally to doubt all the most established maxims of political economy.

3. Nor are matters much better in the Middle Ages. For the Greeks and Romans contented themselves with mocking at rich people, and constructing merry dialogues between Charon and Diogenes or Menippus, in which the ferryman and the cynic rejoiced together as they saw kings and rich men coming down to the shore of Acheron, in lamenting and lamentable crowds, casting their crowns into the dark waters, and searching, sometimes in vain, for the last coin out of all their treasures that could ever be of use to them.

4. But these Pagan views of the matter were indulgent, compared with those which were held in the Middle Ages, when wealth seems to have been looked upon by the best men not only as contemptible, but as criminal. The purse round the neck is, then, one of the principal signs of condemnation in the pictured Inferno; and the Spirit of Poverty is reverenced with subjection of heart, and faithfulness of affection, like that of a loyal knight for his lady, or a loyal subject for his queen....