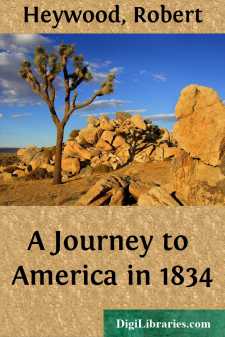 Left home quarter past 10 accompanied by my three friends, Mr. Baker, Mr. John Dean, and Cousin Peter Heywood. Took a walk to the Prince's Dock; found my berth situated near the foot of the staircase. Thence we proceeded to Mr. Thornley's office and met with the kindest attention. Received several letters of introduction and valuable information; recommended me to take dollars; sent a clerk with me to the money exchangers and also lent me £150. Just then I saw James Turner pass by; he got me the money in five minutes. After dinner we drove down with 784 dollars in a bag sealed up, which I deposited in my portmanteau. Embarked at 4 o'clock, got into the river and ¼ before 6 were towed out by a steamer going to Dundalk. The steamer left us at half-past nine P.M. near the floating lights. Charged £18. 18. 0.; went to tea ¼ past 8, found nine passengers. Had a good deal of conversation with one of them, an American, who seemed to be acquainted with all the packets. Said he supposed the Britannia cost 40,000 dollars. Called a vessel old after ten years. Another passenger had been in Egypt and seemed familiar with most parts of America; thought I should have ample time in two months to see the most interesting parts of America, including Canada. Recommended a covering during the night to guard against the mosquitoes. Went to bed about eleven. Slept in drawers and stockings with a night-shirt in addition, there being rather scanty narrow bed clothes. The sea placid so as to allow getting comfortably to bed.

Had a good night, wakened by the crowing of cocks, etc. Our live stock very considerable, consisting of a cow for milk, sheep, turkeys, geese, ducks, hens, etc. Got up at 6½, a fine morning. Breakfast at 8, of fish, beef, mutton, omelettes, tea and coffee. A file of New York papers had been left in the night by an American packet. Found the steerage passengers had a place like the Black Hole of Calcutta, the foolish people not consenting to have their trunks, etc., removed below.

Began reading "A Tour through Canada." Found one of the passengers going out to assist at a Methodistic Conference in Canada. This forenoon the Captain told the helmsman to go north about. The wind became favourable. We left the Welsh coast and came along side of the Isle of Man or rather the Calf. Did not attend lunch and had not much relish for dinner. Munched one of mother's cakes and took tea which I liked very much. Had a pleasant chat in the evening; was informed about the watches which are reckoned from twelve at noon ringing every half hour till four, making what is called eight bells; then begins again. Retired to rest about half past ten. Soon after being in my berth found considerable heaves 6 or 8 times, then still whilst I counted 20 or 25, then again heaving as before. This is occasioned by what are called the Swells.

Had another good night; rose soon after seven, found ourselves within 3 miles of the coast of Ireland with Cantyre on our right....