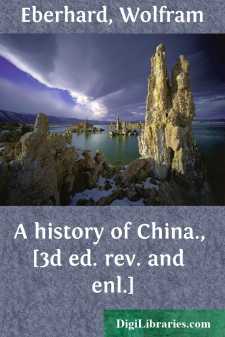 1 Sources for the earliest history

Until recently we were dependent for the beginnings of Chinese history on the written Chinese tradition. According to these sources China's history began either about 4000 B.C. or about 2700 B.C. with a succession of wise emperors who "invented" the elements of a civilization, such as clothing, the preparation of food, marriage, and a state system; they instructed their people in these things, and so brought China, as early as in the third millennium B.C., to an astonishingly high cultural level. However, all we know of the origin of civilizations makes this of itself entirely improbable; no other civilization in the world originated in any such way. As time went on, Chinese historians found more and more to say about primeval times. All these narratives were collected in the great imperial history that appeared at the beginning of the Manchu epoch. That book was translated into French, and all the works written in Western languages until recent years on Chinese history and civilization have been based in the last resort on that translation.

Modern research has not only demonstrated that all these accounts are inventions of a much later period, but has also shown why such narratives were composed. The older historical sources make no mention of any rulers before 2200 B.C., no mention even of their names. The names of earlier rulers first appear in documents of about 400 B.C.; the deeds attributed to them and the dates assigned to them often do not appear until much later. Secondly, it was shown that the traditional chronology is wrong and another must be adopted, reducing all the dates for the more ancient history, before 900 B.C. Finally, all narratives and reports from China's earliest period have been dealt a mortal blow by modern archaeology, with the excavations of recent years. There was no trace of any high civilization in the third millennium B.C., and, indeed, we can only speak of a real "Chinese civilization" from 1300 B.C. onward. The peoples of the China of that time had come from the most varied sources; from 1300 B.C. they underwent a common process of development that welded them into a new unity. In this sense and emphasizing the cultural aspects, we are justified in using from then on a new name, "Chinese", for the peoples of China. Those sections, however, of their ancestral populations who played no part in the subsequent cultural and racial fusion, we may fairly call "non-Chinese". This distinction answers the question that continually crops up, whether the Chinese are "autochthonons". They are autochthonons in the sense that they formed a unit in the Far East, in the geographical region of the present China, and were not immigrants from the Middle East.

Man makes his appearance in the Far East at a time when remains in other parts of the world are very rare and are disputed. He appears as the so-called "Peking Man", whose bones were found in caves of Chou-k'ou-tien south of Peking. The Peking Man is vastly different from the men of today, and forms a special branch of the human race, closely allied to the Pithecanthropus of Java. The formation of later races of mankind from these types has not yet been traced, if it occurred at all. Some anthropologists consider, however, that the Peking Man possessed already certain characteristics peculiar to the yellow race.

The Peking Man lived in caves; no doubt he was a hunter, already in possession of very simple stone implements and also of the art of making fire. As none of the skeletons so far found are complete, it is assumed that he buried certain bones of the dead in different places from the rest. This burial custom, which is found among primitive peoples in other parts of the world, suggests the conclusion that the Peking Man already had religious notions. We have no knowledge yet of the length of time the Peking Man may have inhabited the Far East. His first traces are attributed to a million years ago, and he may have flourished in 500,000 B.C.

After the period of the Peking Man there comes a great gap in our knowledge. All that we know indicates that at the time of the Peking Man there must have been a warmer and especially a damper climate in North China and Inner Mongolia than today. Great areas of the Ordos region, now dry steppe, were traversed in that epoch by small rivers and lakes beside which men could live. There were elephants, rhinoceroses, extinct species of stag and bull, even tapirs and other wild animals. About 50,000 B.C. there lived by these lakes a hunting people whose stone implements (and a few of bone) have been found in many places. The implements are comparable in type with the palaeolithic implements of Europe (Mousterian type, and more rarely Aurignacian or even Magdalenian). They are not, however, exactly like the European implements, but have a character of their own....