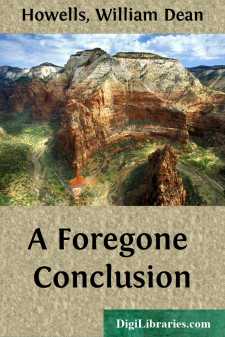 As Don Ippolito passed down the long narrow calle or footway leading from the Campo San Stefano to the Grand Canal in Venice, he peered anxiously about him: now turning for a backward look up the calle, where there was no living thing in sight but a cat on a garden gate; now running a quick eye along the palace walls that rose vast on either hand and notched the slender strip of blue sky visible overhead with the lines of their jutting balconies, chimneys, and cornices; and now glancing toward the canal, where he could see the noiseless black boats meeting and passing. There was no sound in the calle save his own footfalls and the harsh scream of a parrot that hung in the sunshine in one of the loftiest windows; but the note of a peasant crying pots of pinks and roses in the campo came softened to Don Ippolito's sense, and he heard the gondoliers as they hoarsely jested together and gossiped, with the canal between them, at the next gondola station.

The first tenderness of spring was in the air though down in that calle there was yet enough of the wintry rawness to chill the tip of Don Ippolito's sensitive nose, which he rubbed for comfort with a handkerchief of dark blue calico, and polished for ornament with a handkerchief of white linen. He restored each to a different pocket in the sides of the ecclesiastical talare, or gown, reaching almost to his ankles, and then clutched the pocket in which he had replaced the linen handkerchief, as if to make sure that something he prized was safe within. He paused abruptly, and, looking at the doors he had passed, went back a few paces and stood before one over which hung, slightly tilted forward, an oval sign painted with the effigy of an eagle, a bundle of arrows, and certain thunderbolts, and bearing the legend, CONSULATE OF THE UNITED STATES, in neat characters. Don Ippolito gave a quick sigh, hesitated a moment, and then seized the bell-pull and jerked it so sharply that it seemed to thrust out, like a part of the mechanism, the head of an old serving-woman at the window above him.

"Who is there?" demanded this head.

"And what do you command?" further asked the old woman.

Don Ippolito paused, apparently searching for his voice, before he inquired, "Is it here that the Consul of America lives?"

"Is he perhaps at home?"

"Do me that pleasure, dear," said Don Ippolito, and remained knotting his fingers before the closed door. Presently the old woman returned, and looking out long enough to say, "The consul is at home," drew some inner bolt by a wire running to the lock, that let the door start open; then, waiting to hear Don Ippolito close it again, she called out from her height, "Favor me above." He climbed the dim stairway to the point where she stood, and followed her to a door, which she flung open into an apartment so brightly lit by a window looking on the sunny canal, that he blinked as he entered....