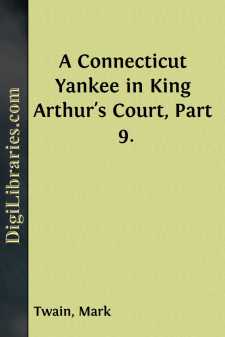 However, my attention was suddenly snatched from such matters; our child began to lose ground again, and we had to go to sitting up with her, her case became so serious.  We couldn't bear to allow anybody to help in this service, so we two stood watch-and-watch, day in and day out.  Ah, Sandy, what a right heart she had, how simple, and genuine, and good she was!  She was a flawless wife and mother; and yet I had married her for no other particular reasons, except that by the customs of chivalry she was my property until some knight should win her from me in the field.  She had hunted Britain over for me; had found me at the hanging-bout outside of London, and had straightway resumed her old place at my side in the placidest way and as of right.  I was a New Englander, and in my opinion this sort of partnership would compromise her, sooner or later.  She couldn't see how, but I cut argument short and we had a wedding.

Now I didn't know I was drawing a prize, yet that was what I did draw.  Within the twelvemonth I became her worshiper; and ours was the dearest and perfectest comradeship that ever was.  People talk about beautiful friendships between two persons of the same sex.  What is the best of that sort, as compared with the friendship of man and wife, where the best impulses and highest ideals of both are the same?  There is no place for comparison between the two friendships; the one is earthly, the other divine.

In my dreams, along at first, I still wandered thirteen centuries away, and my unsatisfied spirit went calling and harking all up and down the unreplying vacancies of a vanished world.  Many a time Sandy heard that imploring cry come from my lips in my sleep. With a grand magnanimity she saddled that cry of mine upon our child, conceiving it to be the name of some lost darling of mine. It touched me to tears, and it also nearly knocked me off my feet, too, when she smiled up in my face for an earned reward, and played her quaint and pretty surprise upon me:

"The name of one who was dear to thee is here preserved, here made holy, and the music of it will abide alway in our ears.  Now thou'lt kiss me, as knowing the name I have given the child."

But I didn't know it, all the same.  I hadn't an idea in the world; but it would have been cruel to confess it and spoil her pretty game; so I never let on, but said:

"Yes, I know, sweetheart—how dear and good it is of you, too! But I want to hear these lips of yours, which are also mine, utter it first—then its music will be perfect."

Pleased to the marrow, she murmured:

I didn't laugh—I am always thankful for that—but the strain ruptured every cartilage in me, and for weeks afterward I could hear my bones clack when I walked.  She never found out her mistake. The first time she heard that form of salute used at the telephone she was surprised, and not pleased; but I told her I had given order for it:  that henceforth and forever the telephone must always be invoked with that reverent formality, in perpetual honor and remembrance of my lost friend and her small namesake....