A Changed Man; and other tales 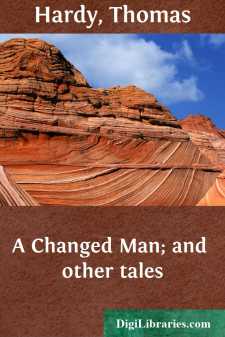 The person who, next to the actors themselves, chanced to know most of their story, lived just below ‘Top o’ Town’ (as the spot was called) in an old substantially-built house, distinguished among its neighbours by having an oriel window on the first floor, whence could be obtained a raking view of the High Street, west and east, the former including Laura’s dwelling, the end of the Town Avenue hard by (in which were played the odd pranks hereafter to be mentioned), the Port-Bredy road rising westwards, and the turning that led to the cavalry barracks where the Captain was quartered.  Looking eastward down the town from the same favoured gazebo, the long perspective of houses declined and dwindled till they merged in the highway across the moor.  The white riband of road disappeared over Grey’s Bridge a quarter of a mile off, to plunge into innumerable rustic windings, shy shades, and solitary undulations up hill and down dale for one hundred and twenty miles till it exhibited itself at Hyde Park Corner as a smooth bland surface in touch with a busy and fashionable world.

To the barracks aforesaid had recently arrived the ---th Hussars, a regiment new to the locality.  Almost before any acquaintance with its members had been made by the townspeople, a report spread that they were a ‘crack’ body of men, and had brought a splendid band.  For some reason or other the town had not been used as the headquarters of cavalry for many years, the various troops stationed there having consisted of casual detachments only; so that it was with a sense of honour that everybody—even the small furniture-broker from whom the married troopers hired tables and chairs—received the news of their crack quality.

In those days the Hussar regiments still wore over the left shoulder that attractive attachment, or frilled half-coat, hanging loosely behind like the wounded wing of a bird, which was called the pelisse, though it was known among the troopers themselves as a ‘sling-jacket.’  It added amazingly to their picturesqueness in women’s eyes, and, indeed, in the eyes of men also.

The burgher who lived in the house with the oriel window sat during a great many hours of the day in that projection, for he was an invalid, and time hung heavily on his hands unless he maintained a constant interest in proceedings without.  Not more than a week after the arrival of the Hussars his ears were assailed by the shout of one schoolboy to another in the street below.

‘Have ’ee heard this about the Hussars?  They are haunted!  Yes—a ghost troubles ’em; he has followed ’em about the world for years.’

A haunted regiment: that was a new idea for either invalid or stalwart.  The listener in the oriel came to the conclusion that there were some lively characters among the ---th Hussars.

He made Captain Maumbry’s acquaintance in an informal manner at an afternoon tea to which he went in a wheeled chair—one of the very rare outings that the state of his health permitted.  Maumbry showed himself to be a handsome man of twenty-eight or thirty, with an attractive hint of wickedness in his manner that was sure to make him adorable with good young women.  The large dark eyes that lit his pale face expressed this wickedness strongly, though such was the adaptability of their rays that one could think they might have expressed sadness or seriousness just as readily, if he had had a mind for such....