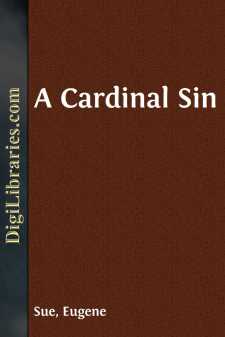 A CARDINAL SIN. CHAPTER I.

On a beautiful, bright morning of the month of May, 18—, a young girl of eighteen years or thereabouts, whose pale, melancholy face reflected only too plainly the wretchedness and privations of her daily life, was wending her way, timidly and with hesitating steps, through that populous quarter of the city known as the Charnier des Innocents, a dreary spot, principally noted for its large number of public scribes, who make a precarious living by acting as secretaries to the ignorant people of the vicinity.

Two or three times she paused, undecided, before an open door; then, thinking perhaps that the writer was either too young or unprepossessing, she slowly resumed her search. She had reached the last of the row, and was on the point of retracing her steps, when her gaze fell on a venerable old man, whose benign countenance beamed kindly on her from his desk; and without further hesitation she resolutely entered the little shop.

Struck by the touching beauty and modest attitude of the young girl, the scribe greeted her with paternal affability, and discreetly drawing the curtain over the dingy window, motioned her to a seat, while he sank back into his old leather-covered arm-chair and waited for her to speak.

The girl's pretty face flushed and she cast down her large, blue eyes in embarrassment, while a painful silence followed. She was evidently agitated by a deep emotion, for her breast heaved visibly beneath the worn merino shawl she wore over her faded gingham dress, and her hands trembled slightly as she folded them on her lap.

"Why this embarrassment, my dear child?" said the old man kindly. "Do you wish me to draw up a petition, a request, or write a letter?"

"Yes, monsieur, I want a letter written," she replied in a low, soft voice, her face flushing still more painfully.

"Can you not write?"

She shook her head and cast down her eyes once more.

Fearing he had needlessly humiliated his client, the old man hastened to add:

"Poor child, do you suppose me capable of blaming your ignorance?"

"Monsieur!—" she began in protestation.

"Ah! believe me," he interrupted, "I feel a great deal of compassion for persons who, having no education, are forced to have recourse to men of my profession, to admit them into their confidence, and reveal their most secret and dearest thoughts! It is very painful, is it not?"

"Yes, indeed, monsieur!" exclaimed the girl, touched by these words."To be obliged to address myself to a stranger, to—"

Her eyes filled with tears and she paused in confusion.

"My dear child, pray recover your composure," entreated the scribe. "You need fear neither indiscretion nor ridicule with me. The confidence reposed in me by persons whom chance or misfortune has deprived of the benefits of education, has always been considered as sacred to me."

"Oh! thank you, monsieur; you relieve me of half my grief by understanding and excusing my embarrassment," said Mariette, gratefully. "Oh! yes," she went on with a sigh, "it is very cruel to know neither how to read nor write; but alas!...