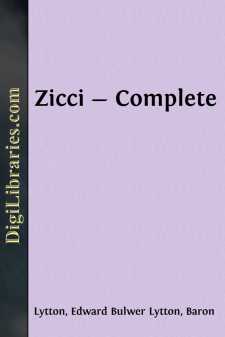 In the gardens at Naples, one summer evening in the last century, some four or five gentlemen were seated under a tree drinking their sherbet and listening, in the intervals of conversation, to the music which enlivened that gay and favorite resort of an indolent population. One of this little party was a young Englishman who had been the life of the whole group, but who for the last few moments had sunk into a gloomy and abstracted revery. One of his countrymen observed this sudden gloom, and tapping him on the back, said, "Glyndon, why, what ails you? Are you ill? You have grown quite pale; you tremble: is it a sudden chill? You had better go home; these Italian nights are often dangerous to our English constitutions."

"No, I am well now,—it was but a passing shudder; I cannot account for it myself."

A man apparently of about thirty years of age, and of a mien and countenance strikingly superior to those around him, turned abruptly, and looked steadfastly at Glyndon.

"I think I understand what you mean," said he,—"and perhaps," he added, with a grave smile, "I could explain it better than yourself." Here, turning to the others, he added, "You must often have felt, gentlemen,—each and all of you,—especially when sitting alone at night, a strange and unaccountable sensation of coldness and awe creep over you; your blood curdles, and the heart stands still; the limbs shiver, the hair bristles; you are afraid to look up, to turn your eyes to the darker corners of the room; you have a horrible fancy that something unearthly is at hand. Presently the whole spell, if I may so call it, passes away, and you are ready to laugh at your own weakness. Have you not often felt what I have thus imperfectly described? If so, you can understand what our young friend has just experienced, even amidst the delights of this magical scene, and amidst the balmy whispers of a July night."

"Sir," replied Glyndon, evidently much surprised, "you have defined exactly the nature of that shudder which came over me. But how could my manner be so faithful an index to my impressions?"

"I know the signs of the visitation," returned the stranger, gravely; "they are not to be mistaken by one of my experience."

All the gentlemen present then declared that they could comprehend, and had felt, what the stranger had described. "According to one of our national superstitions," said Merton, the Englishman who had first addressed Glyndon, "the moment you so feel your blood creep, and your hair stand on end, some one is walking over the spot which shall be your grave."

"There are in all lands different superstitions to account for so common an occurrence," replied the stranger; "one sect among the Arabians hold that at that instant God is deciding the hour either of your death or that of some one dear to you. The African savage, whose imagination is darkened by the hideous rites of his gloomy idolatry, believes that the Evil Spirit is pulling you towards him by the hair. So do the Grotesque and the Terrible mingle with each other."

"It is evidently a mere physical accident,—a derangement of the stomach; a chill of the blood," said a young Neapolitan....