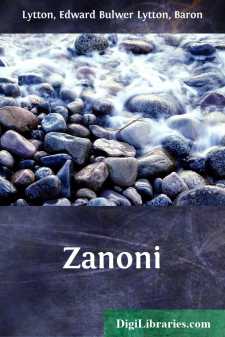 One of the peculiarities of Bulwer was his passion for occult studies. They had a charm for him early in life, and he pursued them with the earnestness which characterised his pursuit of other studies. He became absorbed in wizard lore; he equipped himself with magical implements,—with rods for transmitting influence, and crystal balls in which to discern coming scenes and persons; and communed with spiritualists and mediums. The fruit of these mystic studies is seen in "Zanoni" and "A strange Story," romances which were a labour of love to the author, and into which he threw all the power he possessed,—power re-enforced by multifarious reading and an instinctive appreciation of Oriental thought. These weird stories, in which the author has formulated his theory of magic, are of a wholly different type from his previous fictions, and, in place of the heroes and villains of every day life, we have beings that belong in part to another sphere, and that deal with mysterious and occult agencies. Once more the old forgotten lore of the Cabala is unfolded; the furnace of the alchemist, whose fires have been extinct for centuries, is lighted anew, and the lamp of the Rosicrucian re-illumined. No other works of the author, contradictory as have been the opinions of them, have provoked such a diversity of criticism as these. To some persons they represent a temporary aberration of genius rather than any serious thought or definite purpose; while others regard them as surpassing in bold and original speculation, profound analysis of character, and thrilling interest, all of the author's other works. The truth, we believe, lies midway between these extremes. It is questionable whether the introduction into a novel of such subjects as are discussed in these romances be not an offence against good sense and good taste; but it is as unreasonable to deny the vigour and originality of their author's conceptions, as to deny that the execution is imperfect, and, at times, bungling and absurd.

It has been justly said that the present half century has witnessed the rise and triumphs of science, the extent and marvels of which even Bacon's fancy never conceived, simultaneously with superstitions grosser than any which Bacon's age believed. "The one is, in fact, the natural reaction from the other. The more science seeks to exclude the miraculous, and reduce all nature, animate and inanimate, to an invariable law of sequences, the more does the natural instinct of man rebel, and seek an outlet for those obstinate questionings, those 'blank misgivings of a creature moving about in worlds not realised,' taking refuge in delusions as degrading as any of the so-called Dark Ages." It was the revolt from the chilling materialism of the age which inspired the mystic creations of "Zanoni" and "A Strange Story." Of these works, which support and supplement each other, one is the contemplation of our actual life through a spiritual medium, the other is designed to show that, without some gleams of the supernatural, man is not man, nor nature nature....