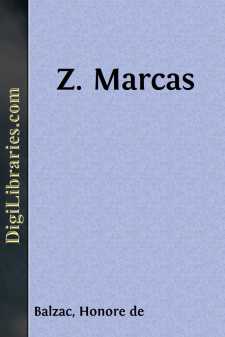 I never saw anybody, not even among the most remarkable men of the day, whose appearance was so striking as this man's; the study of his countenance at first gave me a feeling of great melancholy, and at last produced an almost painful impression.

There was a certain harmony between the man and his name. The Z. preceding Marcas, which was seen on the addresses of his letters, and which he never omitted from his signature, as the last letter of the alphabet, suggested some mysterious fatality.

MARCAS! say this two-syllabled name again and again; do you not feel as if it had some sinister meaning? Does it not seem to you that its owner must be doomed to martyrdom? Though foreign, savage, the name has a right to be handed down to posterity; it is well constructed, easily pronounced, and has the brevity that beseems a famous name. Is it not pleasant as well as odd? But does it not sound unfinished?

I will not take it upon myself to assert that names have no influence on the destiny of men. There is a certain secret and inexplicable concord or a visible discord between the events of a man's life and his name which is truly surprising; often some remote but very real correlation is revealed. Our globe is round; everything is linked to everything else. Some day perhaps we shall revert to the occult sciences.

Do you not discern in that letter Z an adverse influence? Does it not prefigure the wayward and fantastic progress of a storm-tossed life? What wind blew on that letter, which, whatever language we find it in, begins scarcely fifty words? Marcas' name was Zephirin; Saint Zephirin is highly venerated in Brittany, and Marcas was a Breton.

Study the name once more: Z Marcas! The man's whole life lies in this fantastic juxtaposition of seven letters; seven! the most significant of all the cabalistic numbers. And he died at five-and-thirty, so his life extended over seven lustres.

Marcas! Does it not hint of some precious object that is broken with a fall, with or without a crash?

I had finished studying the law in Paris in 1836. I lived at that time in the Rue Corneille in a house where none but students came to lodge, one of those large houses where there is a winding staircase quite at the back lighted below from the street, higher up by borrowed lights, and at the top by a skylight. There were forty furnished rooms—furnished as students' rooms are! What does youth demand more than was here supplied? A bed, a few chairs, a chest of drawers, a looking-glass, and a table. As soon as the sky is blue the student opens his window.

But in this street there are no fair neighbors to flirt with. In front is the Odeon, long since closed, presenting a wall that is beginning to go black, its tiny gallery windows and its vast expanse of slate roof. I was not rich enough to have a good room; I was not even rich enough to have a room to myself. Juste and I shared a double-bedded room on the fifth floor.

On our side of the landing there were but two rooms—ours and a smaller one, occupied by Z....