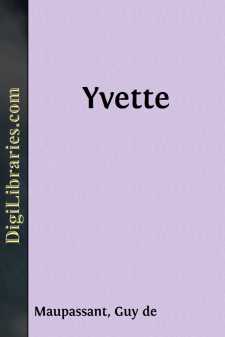 The Initiation of Saval

As they were leaving the Cafe Riche, Jean de Servigny said to Leon Saval: "If you don't object, let us walk. The weather is too fine to take a cab."

Jean replied: "It is hardly eleven o'clock. We shall arrive much before midnight, so let us go slowly."

A restless crowd was moving along the boulevard, that throng peculiar to summer nights, drinking, chatting, and flowing like a river, filled with a sense of comfort and joy. Here and there a cafe threw a flood of light upon a knot of patrons drinking at little tables on the sidewalk, which were covered with bottles and glasses, hindering the passing of the hurrying multitude. On the pavement the cabs with their red, blue, or green lights dashed by, showing for a second, in the glimmer, the thin shadow of the horse, the raised profile of the coachman, and the dark box of the carriage. The cabs of the Urbaine Company made clear and rapid spots when their yellow panels were struck by the light.

The two friends walked with slow steps, cigars in their mouths, in evening dress and overcoats on their arms, with a flower in their buttonholes, and their hats a trifle on one side, as men will carelessly wear them sometimes, after they have dined well and the air is mild.

They had been linked together since their college days by a close, devoted, and firm affection. Jean de Servigny, small, slender, a trifle bald, rather frail, with elegance of mien, curled mustache, bright eyes, and fine lips, was a man who seemed born and bred upon the boulevard. He was tireless in spite of his languid air, strong in spite of his pallor, one of those slight Parisians to whom gymnastic exercise, fencing, cold shower and hot baths give a nervous, artificial strength. He was known by his marriage as well as by his wit, his fortune, his connections, and by that sociability, amiability, and fashionable gallantry peculiar to certain men.

A true Parisian, furthermore, light, sceptical, changeable, captivating, energetic, and irresolute, capable of everything and of nothing; selfish by principle and generous on occasion, he lived moderately upon his income, and amused himself with hygiene. Indifferent and passionate, he gave himself rein and drew back constantly, impelled by conflicting instincts, yielding to all, and then obeying, in the end, his own shrewd man-about-town judgment, whose weather-vane logic consisted in following the wind and drawing profit from circumstances without taking the trouble to originate them.

His companion, Leon Saval, rich also, was one of those superb and colossal figures who make women turn around in the streets to look at them. He gave the idea of a statue turned into a man, a type of a race, like those sculptured forms which are sent to the Salons. Too handsome, too tall, too big, too strong, he sinned a little from the excess of everything, the excess of his qualities. He had on hand countless affairs of passion.

As they reached the Vaudeville theater, he asked: "Have you warned that lady that you are going to take me to her house to see her?"