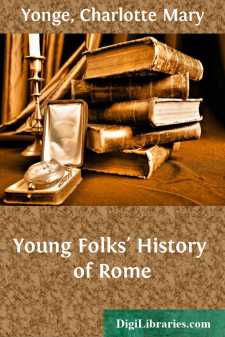 I am going to tell you next about the most famous nation in the world. Going westward from Greece another peninsula stretches down into the Mediterranean. The Apennine Mountains run like a limb stretching out of the Alps to the south eastward, and on them seems formed that land, shaped somewhat like a leg, which is called Italy.

Round the streams that flowed down from these hills, valleys of fertile soil formed themselves, and a great many different tribes and people took up their abode there, before there was any history to explain their coming. Putting together what can be proved about them, it is plain, however, that most of them came of that old stock from which the Greeks descended, and to which we belong ourselves, and they spoke a language which had the same root as ours and as the Greek. From one of these nations the best known form of this, as it was polished in later times, was called Latin, from the tribe who spoke it.

About the middle of the peninsula there runs down, westward from the Apennines, a river called the Tiber, flowing rapidly between seven low hills, which recede as it approaches the sea. One, in especial, called the Palatine Hill, rose separately, with a flat top and steep sides, about four hundred yards from the river, and girdled in by the other six. This was the place where the great Roman power grew up from beginnings, the truth of which cannot now be discovered.

There were several nations living round these hills—the Etruscans, Sabines, and Latins being the chief. The homes of these nations seem to have been in the valleys round the spurs of the Apennines, where they had farms and fed their flocks; but above them was always the hill which they had fortified as strongly as possible, and where they took refuge if their enemies attacked them. The Etruscans built very mighty walls, and also managed the drainage of their cities wonderfully well. Many of their works remain to this day, and, in especial, their monuments have been opened, and the tomb of each chief has been found, adorned with figures of himself, half lying, half sitting; also curious pottery in red and black, from which something of their lives and ways is to be made out. They spoke a different language from what has become Latin, and they had a different religion, believing in one great Soul of the World, and also thinking much of rewards and punishments after death. But we know hardly anything about them, except that their chiefs were called Lucumos, and that they once had a wide power which they had lost before the time of history. The Romans called them Tusci, and Tuscany still keeps its name.

The Latins and the Sabines were more alike, and also more like the Greeks. There were a great many settlements of Greeks in the southern parts of Italy, and they learnt something from them. They had a great many gods. Every house had its own guardian. These were called Lares, or Penates, and were generally represented as little figures of dogs lying by the hearth, or as brass bars with dogs' heads....