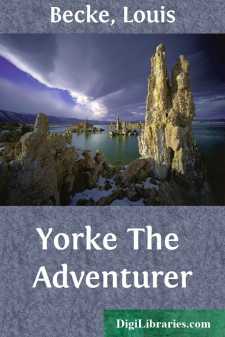 In that delightful and exciting book, written by Captain Joshua Slocum, and entitled, "Sailing Alone Round the World," there is a part wherein the adventurous American seaman relates how he protected himself from night attacks by the savages by a simple, but efficient precaution. It was his custom, when he anchored for the night off the snow-clad and inhospitable shores of Tierra del Fuego, to profusely sprinkle his cutter's deck with sharp tacks, and then calmly turn in and sleep the sleep of the just; for even the horny soles of the Fuegian foot is susceptible to the business end of a tack; and, as I read Slocum's story, I smiled, and thought of dear old Yorke and the Francesco.

I first met Yorke early in the "seventies." Our vessel had run in under the lee of the South Cape of New Britain to wood and water, and effect some repairs, for in working northward through the Solomon Group, on a special mission to a certain island off the coast of New Guinea, we had met with heavy weather, and had lost our foretopmast. In those days there was not a single white man living on the whole of the south coast of New Britain, from St. George's Channel on the east, to Dampier's Straits on the west—a stretch of more than three hundred miles, and little was known of the natives beyond the fact of their being treacherous cannibals. In Blanche Bay only, on the northern shore, was there a settlement of a few adventurous English traders—the employees of a rich German company—and these were only acquainted with the natives in their own vicinity. Even the masters of trading vessels avoided the south coast of the great island, not only on account of the dangerous character of its inhabitants, but also because there was not, they thought, anything to tempt them to risk their and their crews' lives—for the shore nearly everywhere presented a line of dense unbroken forest, with but scanty groves of coco-palms at long intervals, and even had there been many such groves, no communication could be had with the people. In the wild days of the "seventies" the practice of cutting up and drying the coconut into what is known as "copra" had scarcely made any headway in those parts of New Britain, New Ireland, and the Solomon and New Hebrides Groups which were visited by trading vessels—the nuts were turned into oil by a crude and wasteful process known as "rotting."

The captain of our little vessel was one of the oldest and most experienced trading skippers in the Western Pacific, grim, resolute, and daring, but yet cautious of his men's lives, if not of his own; so when he decided to anchor under the lee of the South Cape, he chose a part of the coast which seemed to be but scantily inhabited. The dense forest which came down to the water's edge concealed from view any village that might have been near us; but the presence of smoke arising from various spots denoted that there were some natives living in the vicinity, though we could not see any canoes.

We brought to about half a mile from the shore....