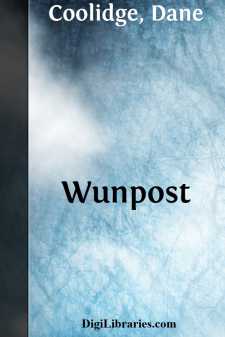 The heat hung like smoke above Panamint Sink, it surged up against the hills like the waves of a great sea that boiled and seethed in the sun; and the mountains that walled it in gleamed and glistened like polished jet where the light was struck back from their sides. They rose up in solid ramparts, unbelievably steep and combed clean by the sluicings of cloudbursts; and where the black canyons had belched forth their floods a broad wash spread out, writhing and twisting like a snake-track, until at last it was lost in the Sink. For the Sink was the swallower-up of all that came from the hills and whatever it sucked in it buried beneath its sands or poisoned on its alkali flats. Yet the Death Valley trail led across its level floor–thirty miles from Wild Rose Springs to Blackwater and its saloons–and while the heat danced and quivered there was a dust in the north pass and a pack-train swung round the point.

It came on furiously, four burros with flat packs and an old man who ran cursing behind; and as he passed down into the Sink there was another dust in the north and a lone man followed as furiously after him. He was young and tall, a mountain of rude strength, and as he strode off down the trail he brandished a piece of quartz and swung his hat in the air. But the pack-train kept on, a column of swirling dust, a blotch of burro-gray in the heat; and as he emptied his canteen he hurled it to the ground and took after his partner on the run. He could see the twinkling feet, the heave of the white packs, the vindictive form dodging behind; and then his knees weakened, his throbbing brain seemed to burst and he fell down cursing in the trail. But the pack-train went on like a tireless automaton that no human power could stay and when he raised his head it was a streamer of dust, a speck on the far horizon.

He rose up slowly and looked around–at the empty trail, the waterless flats, the barren hills all about–and then he raised his fist, which still clutched the chunk of quartz, and shook it at the pillar of dust. His throat was dry and no words came, to carry the burden of his hate, but as he stumbled along his eyes were on the dust-cloud and he choked out gusty oaths. A demoniac strength took possession of his limbs and once more he broke into a run, the muttered oaths grew louder and gave way to savage shouts and then to delirious babblings; and when he awoke he was groveling in a sand-wash and the sun had sunk in the west.

Once more he rose up and looked down the empty trail and across the waterless flats; and then he raised his eyes to the eastern hills, burning red in the last rays of the sun. They were high, very high, with pines on their summits, and from the wash of a near canyon there lapped out a tongue of green, the promise of water beyond. But his strength had left him now and given place to a feverish weakness–the hills were far away, and he could only sit and wait, and if help did not come he would perish. The solemn twilight turned to night, a star glowed in the east; and then, on the high point above the mouth of the canyon, there leapt up a brighter glow....