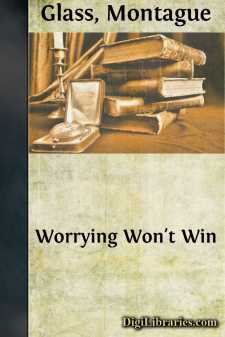 Like the human-hair business and the green-goods business it is not what it used to be.

"Yes, Abe," Morris Perlmutter said to his partner, Abe Potash, as they sat in their office one morning in September, "the English language is practically a brand-new article since the time when I used to went to night school. In them days when a feller says he is feeling like a king, it meant that he was feeling like a king, aber to-day yet, if a feller says he feels like a king it means that he's got stomach and domestic trouble and that he don't know where the money is coming from to pay his next week's laundry bill. Czars is the same way, too. Former times when you called a feller a regular czar you meant he was a regular czar, aber nowadays if you say somebody is a regular czar it means that the poor feller couldn't call his soul his own and that he must got to do what everybody from the shipping-clerk up tells him to do with no back talk."

"Well, it only goes to show, Mawruss," Abe commented. "There was a czar, y'understand, which for years was not only making out pretty good as a czar, y'understand, but had really as you might say been doing something phenomenal yet. In fact, Mawruss, if three years ago R.G. Dun or Bradstreet would give it a rating to czars and people in similar lines, y'understand, compared with the czar already, an old-established house like Hapsburg's in Vienna would be rated N. to Q., Credit Four, see foot-note. And to-day, Mawruss, where is he?"

"Say," Morris protested, "any one could have reverses, Abe, because it don't make no difference if it would be a czar oder a pants manufacturer, and they both had ratings like John B. Rockafellar even, along comes two or three bad seasons like the czar had it, y'understand, and the most you could hope for would be thirty cents on the dollar—ten cents cash and the balance in notes at three, six, and nine months, indorsed by a grand duke who has got everything he owns in his wife's name and 'ain't spent an evening at home with her since way before the Crimean War already."

"What happened to the Czar, Mawruss," Abe said, "bad seasons didn't done it. Not reckoning quick assets, like crowns actually in stock, fixtures, etc., the feller must of owned a couple million versts high-grade real property, to say nothing of his life insurance, Mawruss."

"I bet yer over half a czar's morning mail already is circulars from casket concerns alone, Abe."

"Czars and life insurance ain't in the same dictionary at all, Abe," Morris interrupted. "In the insurance business, Abe, czars comes under the same head as aviators with heart trouble, y'understand. I bet yer over half a czar's morning mail already is circulars from casket concerns alone, Abe, so that only goes to show how much you know from czars."

"Well, I know this much, anyhow," Abe continued. "What put the Czar out of business, didn't happen this season or last season neither, Mawruss. It dates back already twenty years ago, which you can take it from me, Mawruss, it don't make no difference what line a feller would be in—czars wholesale, czars retail, or czars' supplies and sundries, including bombproof underwear and the Little Wonder Poison Detector, y'understand, the moment such a feller marries into the family of his nearest competitor, Mawruss, he might just as well go down to a lawyer's office and hand him the names he wants inserted in Schedule A Three of his petition in bankruptcy."

"Did the Czar marry into such a family?" Morris asked....