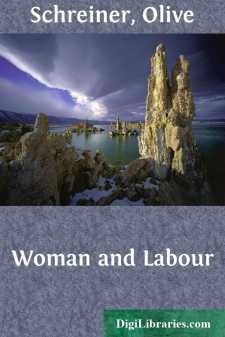 Add to My Favorites
Published: 9 years ago
Downloads: 120
Rating: (0 Votes)

It is necessary to say a few words to explain this book. The original title of the book was "Musings on Woman and Labour."

It is, what its name implies, a collection of musings on some of the points connected with woman's work.

In my early youth I began a book on Woman. I continued the work till ten years ago. It necessarily touched on most matters in which sex has a part, however incompletely.

It began by tracing the differences of sex function to their earliest appearances in life on the globe; not only as when in the animal world, two amoeboid globules coalesce, and the process of sexual generation almost unconsciously begins; but to its yet more primitive manifestations in plant life. In the first three chapters I traced, as far as I was able, the evolution of sex in different branches of non-human life. Many large facts surprised me in following this line of thought by their bearing on the whole modern sex problem. Such facts as this; that, in the great majority of species on the earth the female form exceeds the male in size and strength and often in predatory instinct; and that sex relationships may assume almost any form on earth as the conditions of life vary; and that, even in their sexual relations towards offspring, those differences which we, conventionally, are apt to suppose are inherent in the paternal or the maternal sex form, are not inherent—as when one studies the lives of certain toads, where the female deposits her eggs in cavities on the back of the male, where the eggs are preserved and hatched; or, of certain sea animals, in which the male carries the young about with him and rears them in a pouch formed of his own substance; and countless other such. And above all, this important fact, which had first impressed me when as a child I wandered alone in the African bush and watched cock-o-veets singing their inter-knit love-songs, and small singing birds building their nests together, and caring for and watching over, not only their young, but each other, and which has powerfully influenced all I have thought and felt on sex matters since;—the fact that, along the line of bird life and among certain of its species sex has attained its highest and aesthetic, and one might almost say intellectual, development on earth: a point of development to which no human race as a whole has yet reached, and which represents the realisation of the highest sexual ideal which haunts humanity.

When these three chapters we ended I went on to deal, as far as possible, with woman's condition in the most primitive, in the savage and in the semi-savage states. I had always been strangely interested from childhood in watching the condition of the native African women in their primitive society about me. When I was eighteen I had a conversation with a Kafir woman still in her untouched primitive condition, a conversation which made a more profound impression on my mind than any but one other incident connected with the position of woman has ever done....