With the Turks in Palestine 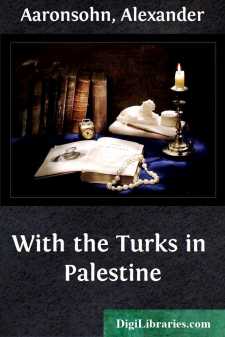 Thirty-five years ago, the impulse which has since been organized as the Zionist Movement led my parents to leave their homes in Roumania and emigrate to Palestine, where they joined a number of other Jewish pioneers in founding Zicron-JacobвЂ”a little village lying just south of Mount Carmel, in that fertile coastal region close to the ancient Plains of Armageddon.

Here I was born; my childhood was passed here in the peace and harmony of this little agricultural community, with its whitewashed stone houses huddled close together for protection against the native Arabs who, at first, menaced the life of the new colony. The village was far more suggestive of Switzerland than of the conventional slovenly villages of the East, mud-built and filthy; for while it was the purpose of our people, in returning to the Holy Land, to foster the Jewish language and the social conditions of the Old Testament as far as possible, there was nothing retrograde in this movement. No time was lost in introducing progressive methods of agriculture, and the climatological experiments of other countries were observed and made use of in developing the ample natural resources of the land.

Eucalyptus, imported from Australia, soon gave the shade of its cool, healthful foliage where previously no trees had grown. In the course of time dry farming (which some people consider a recent discovery, but which in reality is as old as the Old Testament) was introduced and extended with American agricultural implements; blooded cattle were imported, and poultry-raising on a large scale was undertaken with the aid of incubatorsвЂ”to the disgust of the Arabs, who look on such usurpation of the hen's functions as against nature and sinful. Our people replaced the wretched native trails with good roads, bordered by hedges of thorny acacia which, in season, were covered with downy little yellow blossoms that smelled sweeter than honey when the sun was on them.

More important than all these, a communistic village government was established, in which both sexes enjoyed equal rights, including that of suffrageвЂ”strange as this may seem to persons who (when they think of the matter at all) form vague conceptions of all the women-folk of Palestine as shut up in harems.

A short experience with Turkish courts and Turkish justice taught our people that they would have to establish a legal system of their own; two collaborating judges were therefore appointedвЂ”one to interpret the Mosaic law, another to temper it with modern jurisprudence. All Jewish disputes were settled by this court. Its effectiveness may be judged by the fact that the Arabs, weary of Turkish venality,вЂ”as open and shameless as anywhere in the world,вЂ”began in increasing numbers to bring their difficulties to our tribunal. Jews are law-abiding people, and life in those Palestine colonies tended to bring out the fraternal qualities of our race; but it is interesting to note that in over thirty years not one Jewish criminal case was reported from forty-five villages....