With the "Die-Hards" in Siberia 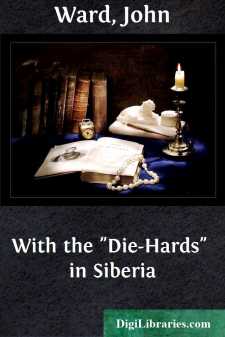 CHAPTER I FROM HONG-KONG TO SIBERIA

The 25th Battalion of the Middlesex Regiment had already such a record of travel and remarkable experiences to its credit that it was in quite a matter-of-fact way I answered a summons from Headquarters at Hong-Kong, one morning in November, 1917, and received the instruction to hold myself and my battalion in readiness to proceed to a destination unknown. Further conferences between the heads of departments under the presidency of the G.O.C., Major-General F. Ventris, revealed that the operations of the battalion were to be conducted in a very cold climate, and a private resident at tiffin that day at the Hong-Kong Club simply asked me "at what date I expected to leave for Vladivostok?"

The preparations were practically completed when orders to cease them were received from the War Office at home, followed by a cable (some time in January, 1918) to cancel all orders relating to the proposed expedition. So we again settled down in Far Eastern home quietly to await the end of the war, when we hoped to return to the Great Old Country and resume the normal life of its citizens.

Things remained in this condition until June, 1918, when we were suddenly startled by an order to call upon the half of my battalion stationed at Singapore to embark on the first ship available and join me at Hong-Kong. This seemed to suggest that the truly wonderful thing called "Allied Diplomacy" had at last made up its mind to do something. After a great deal of bustle and quite unnecessary fuss the whole battalion embarked on the Ping Suie on a Saturday in July, 1918.

It should be remembered that my men were what were called "B one-ers," and were equipped for the duty of that grade; but, after our arrival at Hong-Kong, Headquarters had called in most of our war material to replenish the dwindling supplies of this most distant outpost of the British Empire. Very little information could be gathered as to the kind of duty we might expect to be called upon to perform, and the ignorance of the Staff as to the nature of the country through which we were to operate was simply sublime. Added to this, most of the new material with which we were fitted was quite useless for our purpose. Those things which had been collected on the first notice of movement in 1917 had been dispersed, and the difficulty of securing others at short notice was quite insurmountable.

The voyage was not remarkable except that one typhoon crossed our track not ten miles astern, and for eighteen miles we travelled alongside another, the heavy seas striking the ship nearly abeam, and causing her to roll in a very alarming manner. The troops had a very uncomfortable time, and were glad to sight the coast of Korea and the calm waters of the Sea of Japan.

At Hong-Kong many of the men, including myself, had suffered much from prickly heat, which had developed in many cases into huge heat boils. It was very strange how rapidly these irruptions cured themselves directly we reached the cool, clear atmosphere of the coast of Japan....