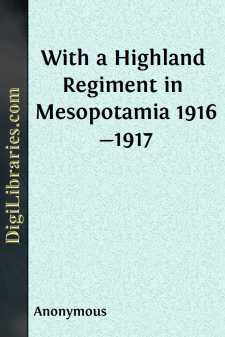 At the outbreak of war, the 2nd Battalion —— was stationed at Bareilly, having been in India since the end of the South African War. Of the fighting in that campaign, the 2nd Battalion had had its full share. At first it formed part of General Wauchope's Highland Brigade and fought with traditional stubbornness at Magersfontein and Paadeburg, and later on identified its name with many of the captures and some of the hardest marches of that campaign.

On the mobilisation of the Indian Corps, the 2nd Battalion formed part of a Brigade of the ——th Division and landed in France early in October 1914, and were in the trenches holding part of the line near Festubert before the end of the month. At no time, except in the early months of 1916 in Mesopotamia, was the Battalion so severely tried as in these first two months in France. The conditions certainly were comfortable neither to mind or body. The trenches were knee deep in mud and water, and were without dug-outs or shelters; the enemy were in great numbers and combined their aggressive tactics with the use of trench mortars and grenades, weapons of which we had neither knowledge nor training; of rest for man or officer there was little, yet no yard of trench entrusted to the Battalion was ever lost either in France or Mesopotamia. With the spring came better times, and at Neuve Chappelle a fine victory was won at small cost, but on the 9th of May the Battalion suffered heavily in making an attack from the Orchard in front of the Rue-de-Bois. Often and with pleasure have we in the Iraq looked back on that summer spent in Picardy. Scouts and snipers, machine gunners and bombers, we all have different memories of those stirring days as the battalion moved from month to month along the trenches from Givenchy Hill to Northward of Laventie; and of the days of rest in billets behind Bethune, Richebourg and the Rue de Paradis; memories of close comradeship, of well-loved friends, of most noble deeds and of lives freely given for King and Country. But the day we recall now and shall ever recall as the red letter day of the year is the 21st of September. Five battalions of the Regiment joined that day in the battle of Loos, and though separated in the line, at one in spirit, all five battalions swept forward regardless of loss, driving the enemy from their trenches, captured line after line of the position and penetrated deep into the German defences.

The 2nd and 4th Battalions had attacked together from Fauguissart and, in reaching the Moulin de Pictre, an advance of two miles made with little support on either left flank or right, the losses had been so severe that the two battalions were afterwards amalgamated into one under the command of Colonel Wauchope. These two battalions, in conjunction with another Highland Regiment under Colonel Thompson, despite several attacks and four mines being blown up within our first line, held Givenchy Hill throughout October. Then, when the Germans quieted down in this neighbourhood, we returned to our old line near the Rue de Bois....