Wild Life on the Rockies 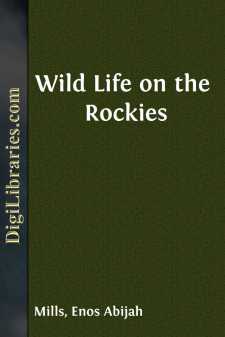 "Where are you going?" was the question asked me one snowy winter day. After hearing that I was off on a camping-trip, to be gone several days, and that the place where I intended to camp was in deep snow on the upper slopes of the Rockies, the questioners laughed heartily. Knowing me, some questioners realized that I was in earnest, and all that they could say in the nature of argument or appeal was said to cause me to "forego the folly." But I went, and in the romance of a new world—on the Rockies in winter—I lived intensely through ten strong days and nights, and gave to my life new and rare experiences. Afterwards I made other winter excursions, all of which were stirring and satisfactory. The recollection of these winter experiences is as complete and exhilarating as any in the vista of my memory.

Some years after my first winter camping-trip, I found myself holding a strange position,—that of the "State Snow Observer of Colorado." I have never heard of another position like it. Professor L. G. Carpenter, the celebrated irrigation engineer, was making some original investigations concerning forests and the water-supply. He persuaded me to take the position, and under his direction I worked as a government experiment officer. For three successive winters I traversed the upper slopes of the Rockies and explored the crest of the continent, alone. While on this work, I was instructed to make notes on "those things that are likely to be of interest or value to the Department of Agriculture or the Weather Bureau,"—and to be careful not to lose my life.

On these winter trips I carried with me a camera, thermometer, barometer, compass, notebook, and folding axe. The food carried usually was only raisins. I left all bedding behind. Notwithstanding I was alone and in the wilds, I did not carry any kind of a gun.

The work made it necessary for me to ramble the wintry heights in sunshine and storm. Often I was out, or rather up, in a blizzard, and on more than one occasion I was out for two weeks on the snow-drifted crest of the continent, without seeing any one. I went beyond the trails and visited the silent places alone. I invaded gulches, eagerly walked the splendid forest aisles, wandered in the dazzling glare on dreary alpine moorlands, and scaled the peaks over mantles of ice and snow. I had many experiences,—amusing, dangerous, and exciting. There was abundance of life and fun in the work. On many an evening darkness captured me and compelled me to spend the night in the wilds without bedding, and often without food. During these nights I kept a camp-fire blazing until daylight released me. When the night was mild, I managed to sleep a little,—in installments,—rising from time to time to give wood to the eager fire. Sometimes a scarcity of wood kept me busy gathering it all night; and sometimes the night was so cold that I did not risk going to sleep. During these nights I watched my flaming fountain of fire brighten, fade, surge, and change, or shower its spray of sparks upon the surrounding snow-flowers....