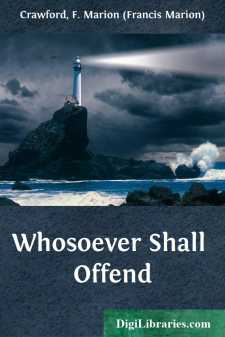 When the widow of Martino Consalvi married young Corbario, people shook their heads and said that she was making a great mistake. Consalvi had been dead a good many years, but as yet no one had thought it was time to say that his widow was no longer young and beautiful, as she had always been. Many rich widows remain young and beautiful as much as a quarter of a century, or even longer, and the Signora Consalvi was very rich indeed. As soon as she was married to Folco Corbario every one knew that she was thirty-five years old and he was barely twenty-six, and that such a difference of ages on the wrong side was ridiculous if it was not positively immoral. No well-regulated young man had a right to marry a rich widow nine years older than himself, and who had a son only eleven years younger than he.

A few philosophers who said that if the widow was satisfied the matter was nobody's business were treated with the contempt they deserved. Those who, on the contrary, observed that young Corbario had married for money and nothing else were heard with favour, until the man who knew everything pointed out that as the greater part of the fortune would be handed over to Marcello when he came of age, six years hence, Corbario had not made a good bargain and might have done better. It was true that Marcello Consalvi had inherited a delicate constitution of body, it had even been hinted that he was consumptive. Corbario would have done better to wait another year or two to see what happened, said a cynic, for young people often died of consumption between fifteen and twenty. The cynic was answered by a practical woman of the world, who said that Corbario had six years of luxury and extravagance before him, and that many men would have sold themselves to the devil for less. After the six years the deluge might come if it must; it was much pleasanter to drown in the end than never to have had the chance of swimming in the big stream at all, and bumping sides with the really big fish, and feeling oneself as good as any of them. Besides, Marcello was pale and thin, and had been heard to cough; he might die before he came of age. The only objection to this theory was that it was based on a fiction; for the whole fortune had been left to the Signora by a childless relation.

These amiable and interesting views were expressed with variations by people who knew the three persons concerned, and with such a keen sense of appropriate time and place as made it quite sure that none of the three should ever know what was said of them. The caution of an old fox is rash temerity compared with the circumspection of a first-rate gossip; and when the gossips were tired of discussing Folco Corbario and his wife and her son, they talked about other matters, but they had a vague suspicion that they had been cheated out of something. A cat that has clawed all the feathers off a stuffed canary might feel just what they did.

For nothing happened. Corbario did not launch into wild extravagance after all, but behaved himself with the faultless dulness of a model middle-aged husband....