Who Wrote the Bible? : a Book for the People 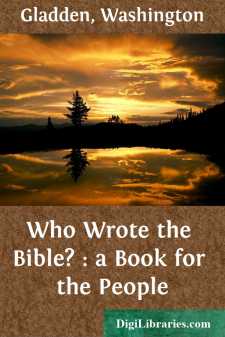 In the last chapter the opinion was expressed that the first books collected by Nehemiah, when he made up his "library," a century after the Exile, were the writings of the prophets. We studied the historical books first, because they stand first in the Hebrew Bible, and are there named the "Earlier Prophets;" but the probabilities are that the prophetical writings proper, called by the Jews the "Later Prophets," were first gathered.

When was this collection made? If it was made by Nehemiah (and there is nothing to discredit the statement of the author of 2 Maccabees that he was the collector), then it was not compiled until one hundred years after the Exile, or only about four hundred and twenty years before Christ. Most of the prophets had written before or during the Exile. Joel, Hosea, and Amos had flourished three or four hundred years before this collection was made; Isaiah, the greatest of them all, had been in his grave almost three centuries; Micah, nearly as long; Nahum, Habakkuk, and Zephaniah had been silent from one to two hundred years; Jeremiah, who was alive when the seventy years' captivity began, and Ezekiel, who prophesied and perished among the captives on the banks of the Euphrates, were more remote from Nehemiah than Samuel Johnson and Jonathan Edwards are from us; even Haggai and Zechariah, who came back with the returning exiles and helped to build the second temple, had passed away from fifty to one hundred years before the time of Nehemiah. Malachi alone,--"The Messenger,"--and the last of the prophets, may have been alive when the compilation of the prophetic writings was made.

It may be safely conjectured that the Jews, although they had never possessed any collection of the books of the prophets, had known something of their contents. Several of the prophets had foretold the desolation and the captivity, and there had been abundant time during the Exile to recall the words they had spoken and to wish that their fathers had heeded them. These remembered words of the prophets, passing from lip to lip, would thus have acquired peculiar sacredness. It seems clear, also, that copies of these books must have been kept,--perhaps in the schools of the prophets; for the later prophets quote, verbally, from the earlier ones. It may, therefore, have been in response to a popular wish that this collection of their writings was undertaken. Words so momentous as these ought to be sacredly treasured. Furthermore, there were reasons to apprehend that the holy flame of prophecy was dying out. Malachi may have been speaking still, but there was not much promise that he would have a successor, and the expectation of prophetic voices was growing dim among the people.

The Levitical ritual, now so elaborate and cumbersome, had supplanted the prophetic oracle. The ritualist is never a prophet; and out of such a formal cult no words of inspiration are apt to flow. With all the greater carefulness, therefore, would the people treasure the messages that had come to them from the past....