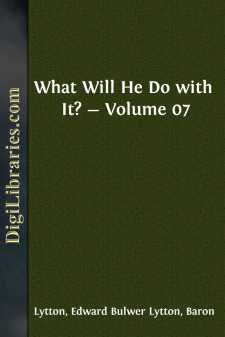 "Of course—I understand, and entirely agree with you. But if the man retract all threats, confess his imposture in respect to this pretended offspring, and consent to retire for life to a distant colony, upon an annuity that may suffice for his wants, but leave no surplus beyond, to render more glaring his vices, or more effective his powers of evil; if this could be arranged between Mr. Poole and myself, I think that your peace might be permanently secured without the slightest sacrifice of honour. Will you leave the matter in my hands on this assurance—that I will not give this person a farthing except on the conditions I have premised?"

"On these conditions, yes, and most gratefully," said Darrell. "Do what you will; but one favour more: never again speak to me (unless absolutely compelled) in reference to this dark portion of my inner life."

Alban pressed his friend's hand, and both were silent for some moments. Then said the Colonel, with an attempt at cheerfulness: "Darrell, more than ever now do I see that the new house at Fawley, so long suspended, must be finished. Marry again you must!—you can never banish old remembrances unless you can supplant them by fresh hopes."

"I feel it—I know it," cried Darrell, passionately. And oh! if one remembrance could be wrenched away! But it shall—it shall!"

"Ah!" thought Alban—" the remembrance of his former conjugal life!—a remembrance which might well make the youngest and the boldest Benedict shrink from the hazard of a similar experiment."

CHAPTER XI. OUR OLD FRIEND THE POCKET-CANNIBAL EVINCES UNEXPECTED PATRIOTISM AND PHILOSOPHICAL MODERATION, CONTENTED WITH A STEAK OFF HIS OWN SUCCULENT FRIEND IN THE AIRS OF HIS OWN NATIVE SKY.

Colonel Morley had a second interview with Mr. Poole. It needed not Alban's knowledge of the world to discover that Poole was no partial friend to Jasper Losely; that, for some reason or other, Poole was no less anxious than the Colonel to get that formidable client, whose cause he so warmly advocated, pensioned and packed off into the region most remote from Great Britain in which a spirit hitherto so restless might consent to settle. And although Mr. Poole had evidently taken offence at Mr. Darrell's discourteous rebuff of his amiable intentions, yet no grudge against Darrell furnished a motive for conduct equal to his Christian desire that Darrell's peace should be purchased by Losely's perpetual exile. Accordingly, Colonel Morley took leave, with a well- placed confidence in Poole's determination to do all in his power to induce Jasper to listen to reason. The Colonel had hoped to learn something from Poole of the elder Losely's present residence and resources. Poole, as we know, could give him there no information. The Colonel also failed to ascertain any particulars relative to that female pretender on whose behalf Jasper founded his principal claim to Darrell's aid. And so great was Poole's embarrassment in reply to all questions on that score—Where was the young person? With whom had she lived? What was she like? Could the Colonel see her, and hear her own tale?—that Alban entertained a strong suspicion that no such girl was in existence; that she was a pure fiction and myth; or that, if Jasper were compelled to produce some petticoated fair, she would be an artful baggage hired for the occasion.

Poole waited Jasper's next visit with impatience and sanguine delight....