What Will He Do with It? - Complete 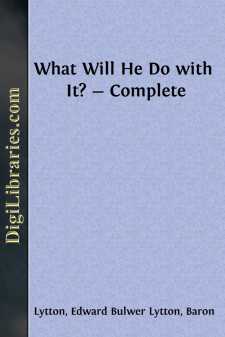 CHAPTER I. In which the history opens with a description of the social manners,habits, and amusements of the English People, as exhibited in animmemorial National Festivity.—Characters to be commemorated in thehistory, introduced and graphically portrayed, with a nasologicalillustration.—Original suggestions as to the idiosyncrasiesengendered by trades and callings, with other matters worthy ofnote, conveyed in artless dialogue after the manner of Herodotus,Father of History (mother unknown).

It was a summer fair in one of the prettiest villages in Surrey. The main street was lined with booths, abounding in toys, gleaming crockery, gay ribbons, and gilded ginger bread. Farther on, where the street widened into the ample village-green, rose the more pretending fabrics which lodged the attractive forms of the Mermaid, the Norfolk Giant; the Pig-faced Lady, the Spotted Boy, and the Calf with Two Heads; while high over even these edifices, and occupying the most conspicuous vantage-ground, a lofty stage promised to rural playgoers the "Grand Melodramatic Performance of The Remorseless Baron and the Bandit's Child." Music, lively if artless, resounded on every side,—drums, fifes, penny-whistles, cat-calls, and a hand-organ played by a dark foreigner, from the height of whose shoulder a cynical but observant monkey eyed the hubbub and cracked his nuts.

It was now sunset,—the throng at the fullest,—an animated, joyous scene. The, day had been sultry; no clouds were to be seen, except low on the western horizon, where they stretched, in lengthened ridges of gold and purple, like the border-land between earth and sky. The tall elms on the green were still, save, near the great stage, one or two, upon which had climbed young urchins, whose laughing faces peered forth, here and there, from the foliage trembling under their restless movements.

Amidst the crowd, as it streamed saunteringly along, were two spectators; strangers to the place, as was notably proved by the attention they excited, and the broad jokes their dress and appearance provoked from the rustic wits,—jokes which they took with amused good-humour, and sometimes retaliated with a zest which had already made them very popular personages. Indeed, there was that about them which propitiated liking. They were young; and the freshness of enjoyment was so visible in their faces, that it begot a sympathy, and wherever they went, other faces brightened round them.

One of the two whom we have thus individualized was of that enviable age, ranging from five-and-twenty to seven-and-twenty, in which, if a man cannot contrive to make life very pleasant,—pitiable indeed must be the state of his digestive organs. But you might see by this gentleman's countenance that if there were many like him, it would be a worse world for the doctors. His cheek, though not highly coloured, was yet ruddy and clear; his hazel eyes were lively and keen; his hair, which escaped in loose clusters from a jean shooting-cap set jauntily on a well-shaped head, was of that deep sunny auburn rarely seen but in persons of vigorous and hardy temperament....