What We Saw in Egypt 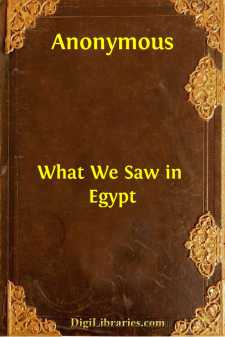 HOW WE FARED IN THE SUEZ DESERT.

T he welcome cry of "Suez! Suez!" resounded throughout the steamship Bentinck one November morning. The passage up the Red Sea had been rough, and every one was glad to exchange the rolling and pitching of the vessel for land travelling. The railway between Cairo and Suez was not yet finished, and travellers crossed the desert in vans, each of which held six persons and was drawn by two horses and two mules. Our cavalcade consisted of eight of these high-wheeled vans. The fifth team of vans contained four grown-up people and two children, Hugh and Lucy.

It was a lovely day, the sky blue and clear as on the finest summer day in England.

Some little time after leaving Suez, a spot was pointed out to us as the place at or near which the Israelites crossed the Red Sea. The waters were now calm and peaceful; they lay gleaming like silver in the sunlight. But these very waters had been raised as a wall on the right hand and on the left for the children of Israel to pass through. Then, with a mighty surge, they had overwhelmed Pharaoh and his host, obedient to the word of God. This miracle of old seemed more real than it had ever done before, while we looked at the very waters on which it was worked.

On we went. A blue cloudless sky above; below, sand, sand, sand: except where, every now and then, we jolted over large blocks of stone which sent us bobbing now to this side, now to that, sometimes almost into each other's faces, to the great amusement of the children. We stopped about every seven or eight miles, to change our horses and mules; generally at some little lonely building.

Wherever we stopped, we all got out for a breath of air. For as we passed stage after stage, the sameness of the desert began to be tiring, especially to the children. This was not to be wondered at; for, except the occasional skeleton of some poor camel, whose bones were bleached by the sun, there was really nothing to interest them. Hugh consoled himself with a nap now and then, but Lucy was wakeful and restless.

At last we reached the midway station, where we were to stop for nearly an hour, and to dine.

"How glad I am to get out of this stuffy little van, and to stay out of it for a good while!" Lucy cried, as she jumped down on the sand.

"Will they give us some dinner?"

Certainly, this was the only thing we had to wait for.

We went into a large room, in which were long tables, and benches at them. The dinner was soon brought in. Dishes of fowl and stewed cabbage, dried fruits, and fresh dates, succeeded one another, with plenty of bottled beer. There was no bread. But some of the older travellers had brought some loaves from the Bentinck, and were very good-natured in dividing their store with their fellow-passengers.

After dinner we had some coffee, which we found very refreshing; and soon the vans were announced. In a few minutes we were in our old seats again, cutting our path through the sand and jolting over large blocks of stone.

"There is another skeleton, papa," cried Hugh, pointing to the whitened ribs of a camel....