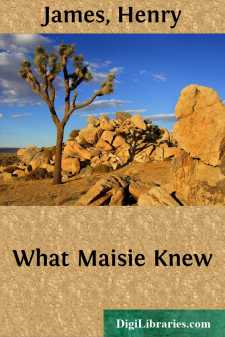 The litigation seemed interminable and had in fact been complicated; but by the decision on the appeal the judgement of the divorce-court was confirmed as to the assignment of the child. The father, who, though bespattered from head to foot, had made good his case, was, in pursuance of this triumph, appointed to keep her: it was not so much that the mother's character had been more absolutely damaged as that the brilliancy of a lady's complexion (and this lady's, in court, was immensely remarked) might be more regarded as showing the spots. Attached, however, to the second pronouncement was a condition that detracted, for Beale Farange, from its sweetness—an order that he should refund to his late wife the twenty-six hundred pounds put down by her, as it was called, some three years before, in the interest of the child's maintenance and precisely on a proved understanding that he would take no proceedings: a sum of which he had had the administration and of which he could render not the least account. The obligation thus attributed to her adversary was no small balm to Ida's resentment; it drew a part of the sting from her defeat and compelled Mr. Farange perceptibly to lower his crest. He was unable to produce the money or to raise it in any way; so that after a squabble scarcely less public and scarcely more decent than the original shock of battle his only issue from his predicament was a compromise proposed by his legal advisers and finally accepted by hers.

His debt was by this arrangement remitted to him and the little girl disposed of in a manner worthy of the judgement-seat of Solomon. She was divided in two and the portions tossed impartially to the disputants. They would take her, in rotation, for six months at a time; she would spend half the year with each. This was odd justice in the eyes of those who still blinked in the fierce light projected from the tribunal—a light in which neither parent figured in the least as a happy example to youth and innocence. What was to have been expected on the evidence was the nomination, in loco parentis, of some proper third person, some respectable or at least some presentable friend. Apparently, however, the circle of the Faranges had been scanned in vain for any such ornament; so that the only solution finally meeting all the difficulties was, save that of sending Maisie to a Home, the partition of the tutelary office in the manner I have mentioned. There were more reasons for her parents to agree to it than there had ever been for them to agree to anything; and they now prepared with her help to enjoy the distinction that waits upon vulgarity sufficiently attested. Their rupture had resounded, and after being perfectly insignificant together they would be decidedly striking apart. Had they not produced an impression that warranted people in looking for appeals in the newspapers for the rescue of the little one—reverberation, amid a vociferous public, of the idea that some movement should be started or some benevolent person should come forward? A good lady came indeed a step or two: she was distantly related to Mrs. Farange, to whom she proposed that, having children and nurseries wound up and going, she should be allowed to take home the bone of contention and, by working it into her system, relieve at least one of the parents. This would make every time, for Maisie, after her inevitable six months with Beale, much more of a change.

"More of a change?" Ida cried. "Won't it be enough of a change for her to come from that low brute to the person in the world who detests him most?"

"No, because you detest him so much that you'll always talk to her about him. You'll keep him before her by perpetually abusing him."

Mrs. Farange stared. "Pray, then, am I to do nothing to counteract his villainous abuse of me?"

The good lady, for a moment, made no reply: her silence was a grim judgement of the whole point of view. "Poor little monkey!" she at last exclaimed; and the words were an epitaph for the tomb of Maisie's childhood. She was abandoned to her fate. What was clear to any spectator was that the only link binding her to either parent was this lamentable fact of her being a ready vessel for bitterness, a deep little porcelain cup in which biting acids could be mixed. They had wanted her not for any good they could do her, but for the harm they could, with her unconscious aid, do each other. She should serve their anger and seal their revenge, for husband and wife had been alike crippled by the heavy hand of justice, which in the last resort met on neither side their indignant claim to get, as they called it, everything....