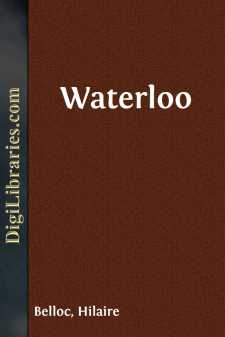 THE POLITICAL OBJECT AND EFFECT OF THE WATERLOO CAMPAIGN

Thus, to take the simplest and crudest case, a nation or its government determines to annex the territory of a neighbour; that is, to subject a neighbouring community to the laws of the conqueror. That neighbouring community and its government, if they are so old-fashioned as to prefer freedom, will resist by force of arms, and there will follow what is called a “campaign” (a term derived from the French, and signifying a countryside: for countrysides are the theatres of wars). In this campaign the political object of the attempted conquest on the one hand, and of resistance to it on the other, are the issue. The military aspect of the campaign is subsidiary to its political objects, and we judge of its success or failure not in military but in political terms.

The prime military object of a general is to “annihilate” the armed force of his opponents. He may do this by breaking up their organisation and dispersing them, or by compelling the surrender of their arms. He may achieve success in this purely military object in any degree. But if, as an end and consequence of his military success, the political object be not achieved—if, for instance, in the particular case we are considering, the neighbouring community does not in the future obey laws dictated to it by the conqueror, but remains autonomous—then the campaign has failed.

Such considerations are, I repeat, the very foundation of military history; and throughout this Series they will be insisted upon as the light in which alone military history can be understood.

It is further true that not only may a campaign be successful in the military sense, and yet in the largest historical sense be a failure, but, quite evidently, the actions in a campaign may each be successful and yet the campaign a failure; or each action may, on the whole, fail, and yet that campaign be a success. As the old formulæ go, “You can win every battle and lose your campaign.” And, again, “A great general does not aim at winning battles, but at winning his campaign.” An action results from the contact of the opposing forces, and from the necessity in which they find themselves, after such contact, of attempting the one to disorganise or to capture the other....