by Henry A. (Henry Augustus) Mott 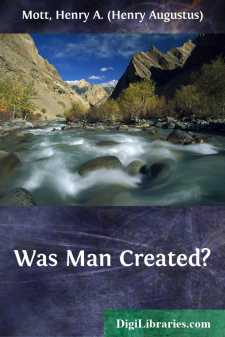 Add to My Favorites
Published: 8 years ago
Downloads: 154
Rating: (0 Votes)

This work was originally written to be delivered as a lecture; but as its pages continued to multiply, it was suggested to the author by numerous friends that it ought to be published in book-form; this, at last, the author concluded to do. This work, therefore, does not claim to be an exhaustive discussion of the various departments of which it treats; but rather it has been the aim of the author to present the more interesting observations in each department in as concise a form as possible. The author has endeavored to give credit in every instance where he has taken advantage of the labors of others. This work is not intended for that class of people who are so absolutely certain of the truth of their religion and of the immortality that it teaches, that they have become unqualified to entertain or even perceive of any scientific objection; for such people may be likened unto those who, "Seeing, they see, but will not perceive; and hearing, they hear, but will not understand."

This work is written for the man of culture who is seeking for truth—believing, as does the author, that all truth is God's truth, and therefore it becomes the duty of every scientific man to accept it; knowing, however, that it will surely modify the popular creeds and methods of interpretation, its final result can only be to the glory of God and to the establishment of a more exalted and purer religion. All facts are truths; it consequently follows that all scientific facts are truths—there is no half-way house—a statement is either a truth or it is not a truth, according to the law of non-contradiction. If, therefore, we find tabulated amongst scientific facts (or truths) a statement which is not a fact, it is not science; but all statements which are facts it naturally follows are truths, and as such must be accepted, no matter how repulsive they may at first seem to some of our poetical imaginings and pet theories. We cannot help but sympathize with the feelings which prompted President Barnard to write the following lines, still we will see he was too hasty: "Much as I love truth in the abstract," he says, "I love my hope of immortality more." * * * He maintained that it is better to close one's eyes to the evidences than to be convinced of the truth of certain doctrines which he regards as subversive of the fundamentals of Christian faith. "If this (is all) is the best that science can give me, then I pray no more science. Let me live on in my simple ignorance, as my fathers lived before me; and when I shall at length be summoned to my final repose, let me still be able to fold the drapery of my couch about me, and lie down to pleasant, even though they be deceitful, dreams." The limitations to the acceptance of truth that President Barnard makes is wrong; for, as Professor Winchell has said, "we think it is a higher aspiration to wish to know 'the truth and the whole truth.' At the same time, we have not the slightest apprehension that the whole truth can ever dissipate our faith in a future life." Let us "Prove all things and hold fast unto that which is good," recognizing the fact that "the truth-seeker is the only God-seeker."