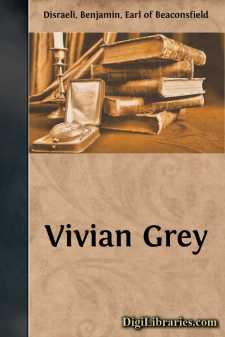 We are not aware that the infancy of Vivian Grey was distinguished by any extraordinary incident. The solicitude of the most affectionate of mothers, and the care of the most attentive of nurses, did their best to injure an excellent constitution. But Vivian was an only child, and these exertions were therefore excusable. For the first five years of his life, with his curly locks and his fancy dress, he was the pride of his own and the envy of all neighbouring establishments; but, in process of time, the spirit of boyism began to develop itself, and Vivian not only would brush his hair straight and rebel against his nurse, but actually insisted upon being—breeched! At this crisis it was discovered that he had been spoiled, and it was determined that he should be sent to school. Mr. Grey observed, also, that the child was nearly ten years old, and did not know his alphabet, and Mrs. Grey remarked that he was getting ugly. The fate of Vivian was decided.

"I am told, my dear," observed Mrs. Grey, one day after dinner to her husband, "I am told, my dear, that Dr. Flummery's would do very well for Vivian. Nothing can exceed the attention which is paid to the pupils. There are sixteen young ladies, all the daughters of clergymen, merely to attend to the morals and the linen; terms moderate: 100 guineas per annum, for all under six years of age, and few extras, only for fencing, pure milk, and the guitar. Mrs. Metcalfe has both her boys there, and she says their progress is astonishing! Percy Metcalfe, she assures me, was quite as backward as Vivian; indeed, backwarder; and so was Dudley, who was taught at home on the new system, by a pictorial alphabet, and who persisted to the last, notwithstanding all the exertions of Miss Barrett, in spelling A-P-E, monkey, merely because over the word there was a monster munching an apple."

"And quite right in the child, my dear. Pictorial alphabet! pictorial fool's head!"

"But what do you say to Flummery's, Horace?"

"My dear, do what you like. I never trouble myself, you know, about these matters;" and Mr. Grey refreshed himself, after this domestic attack, with a glass of claret.

Mr. Grey was a gentleman who had succeeded, when the heat of youth was over, to the enjoyment of a life estate of some two thousand a year. He was a man of lettered tastes, and had hailed with no slight pleasure his succession to a fortune which, though limited in its duration, was still a great thing for a young lounger about town, not only with no profession, but with a mind unfitted for every species of business. Grey, to the astonishment of his former friends, the wits, made an excellent domestic match; and, leaving the whole management of his household to his lady, felt himself as independent in his magnificent library as if he had never ceased to be that true freeman, A MAN OF CHAMBERS.

The young Vivian had not, by the cares which fathers are always heirs to, yet reminded his parent that children were anything else but playthings....