Villa Rubein, and other stories 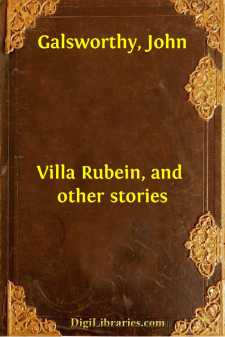 Writing not long ago to my oldest literary friend, I expressed in a moment of heedless sentiment the wish that we might have again one of our talks of long-past days, over the purposes and methods of our art. And my friend, wiser than I, as he has always been, replied with this doubting phrase "Could we recapture the zest of that old time?"

I would not like to believe that our faith in the value of imaginative art has diminished, that we think it less worth while to struggle for glimpses of truth and for the words which may pass them on to other eyes; or that we can no longer discern the star we tried to follow; but I do fear, with him, that half a lifetime of endeavour has dulled the exuberance which kept one up till morning discussing the ways and means of aesthetic achievement. We have discovered, perhaps with a certain finality, that by no talk can a writer add a cubit to his stature, or change the temperament which moulds and colours the vision of life he sets before the few who will pause to look at it. And so—the rest is silence, and what of work we may still do will be done in that dogged muteness which is the lot of advancing years.

Other times, other men and modes, but not other truth. Truth, though essentially relative, like Einstein's theory, will never lose its ever-new and unique quality-perfect proportion; for Truth, to the human consciousness at least, is but that vitally just relation of part to whole which is the very condition of life itself. And the task before the imaginative writer, whether at the end of the last century or all these aeons later, is the presentation of a vision which to eye and ear and mind has the implicit proportions of Truth.

I confess to have always looked for a certain flavour in the writings of others, and craved it for my own, believing that all true vision is so coloured by the temperament of the seer, as to have not only the just proportions but the essential novelty of a living thing for, after all, no two living things are alike. A work of fiction should carry the hall mark of its author as surely as a Goya, a Daumier, a Velasquez, and a Mathew Maris, should be the unmistakable creations of those masters. This is not to speak of tricks and manners which lend themselves to that facile elf, the caricaturist, but of a certain individual way of seeing and feeling. A young poet once said of another and more popular poet: "Oh! yes, but be cuts no ice." And, when one came to think of it, he did not; a certain flabbiness of spirit, a lack of temperament, an absence, perhaps, of the ironic, or passionate, view, insubstantiated his work; it had no edge—just a felicity which passed for distinction with the crowd.

Let me not be understood to imply that a novel should be a sort of sandwich, in which the author's mood or philosophy is the slice of ham. One's demand is for a far more subtle impregnation of flavour; just that, for instance, which makes De Maupassant a more poignant and fascinating writer than his master Flaubert, Dickens and Thackeray more living and permanent than George Eliot or Trollope....