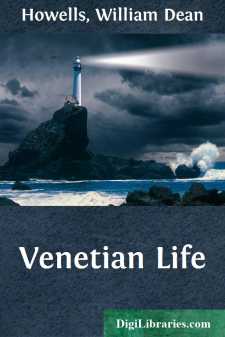 CHAPTER I. VENICE IN VENICE.

One night at the little theatre in Padua, the ticket-seller gave us the stage-box (of which he made a great merit), and so we saw the play and the byplay. The prompter, as noted from our point of view, bore a chief part in the drama (as indeed the prompter always does in the Italian theatre), and the scene-shifters appeared as prominent characters. We could not help seeing the virtuous wife, when hotly pursued by the villain of the piece, pause calmly in the wings, before rushing, all tears and desperation, upon the stage; and we were dismayed to behold the injured husband and his abandoned foe playfully scuffling behind the scenes. All the shabbiness of the theatre was perfectly apparent to us; we saw the grossness of the painting and the unreality of the properties. And yet I cannot say that the play lost one whit of its charm for me, or that the working of the machinery and its inevitable clumsiness disturbed my enjoyment in the least. There was so much truth and beauty in the playing, that I did not care for the sham of the ropes and gilding, and presently ceased to take any note of them. The illusion which I had thought an essential in the dramatic spectacle, turned out to be a condition of small importance.

It has sometimes seemed to me as if fortune had given me a stage-box at another and grander spectacle, and I had been suffered to see this VENICE, which is to other cities like the pleasant improbability of the theatre to every-day, commonplace life, to much the same effect as that melodrama in Padua. I could not, indeed, dwell three years in the place without learning to know it differently from those writers who have described it in romances, poems, and hurried books of travel, nor help seeing from my point of observation the sham and cheapness with which Venice is usually brought out, if I may so speak, in literature. At the same time, it has never lost for me its claim upon constant surprise and regard, nor the fascination of its excellent beauty, its peerless picturesqueness, its sole and wondrous grandeur. It is true that the streets in Venice are canals; and yet you can walk to any part of the city, and need not take boat whenever you go out of doors, as I once fondly thought you must. But after all, though I find dry land enough in it, I do not find the place less unique, less a mystery, or less a charm. By day, the canals are still the main thoroughfares; and if these avenues are not so full of light and color as some would have us believe, they, at least, do not smell so offensively as others pretend. And by night, they are still as dark and silent as when the secret vengeance of the Republic plunged its victims into the ungossiping depths of the Canalazzo!

Did the vengeance of the Republic ever do any such thing?

Possibly. In Venice one learns not quite to question that reputation for vindictive and gloomy cruelty alien historians have given to a government which endured so many centuries in the willing obedience of its subjects; but to think that the careful student of the old Republican system will condemn it for faults far different from those for which it is chiefly blamed....