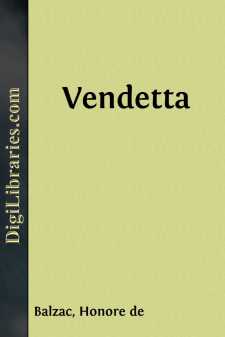 In the year 1800, toward the close of October, a foreigner, accompanied by a woman and a little girl, was standing for a long time in front of the palace of the Tuileries, near the ruins of a house recently pulled down, at the point where in our day the wing begins which was intended to unite the chateau of Catherine de Medici with the Louvre of the Valois.

The man stood there with folded arms and a bowed head, which he sometimes raised to look alternately at the consular palace and at his wife, who was sitting near him on a stone. Though the woman seemed wholly occupied with the little girl of nine or ten years of age, whose long black hair she amused herself by handling, she lost not a single glance of those her companion cast on her. Some sentiment other than love united these two beings, and inspired with mutual anxiety their movements and their thoughts. Misery is, perhaps, the most powerful of all ties.

The stranger had one of those broad, serious heads, covered with thick hair, which we see so frequently in the pictures of the Caracci. The jet black of the hair was streaked with white. Though noble and proud, his features had a hardness which spoiled them. In spite of his evident strength, and his straight, erect figure, he looked to be over sixty years of age. His dilapidated clothes were those of a foreign country. Though the faded and once beautiful face of the wife betrayed the deepest sadness, she forced herself to smile, assuming a calm countenance whenever her husband looked at her.

The little girl was standing, though signs of weariness were on the youthful face, which was tanned by the sun. She had an Italian cast of countenance and bearing, large black eyes beneath their well arched brows, a native nobleness, and candid grace. More than one of those who passed them felt strongly moved by the mere aspect of this group, who made no effort to conceal a despair which seemed as deep as the expression of it was simple. But the flow of this fugitive sympathy, characteristic of Parisians, was dried immediately; for as soon as the stranger saw himself the object of attention, he looked at his observer with so savage an air that the boldest lounger hurried his step as though he had trod upon a serpent.

After standing for some time undecided, the tall stranger suddenly passed his hand across his face to brush away, as it were, the thoughts that were ploughing furrows in it. He must have taken some desperate resolution. Casting a glance upon his wife and daughter, he drew a dagger from his breast and gave it to his companion, saying in Italian:—

"I will see if the Bonapartes remember us."

Then he walked with a slow, determined step toward the entrance of the palace, where he was, naturally, stopped by a soldier of the consular guard, with whom he was not permitted a long discussion. Seeing this man's obstinate determination, the sentinel presented his bayonet in the form of an ultimatum. Chance willed that the guard was changed at that moment, and the corporal very obligingly pointed out to the stranger the spot where the commander of the post was standing....