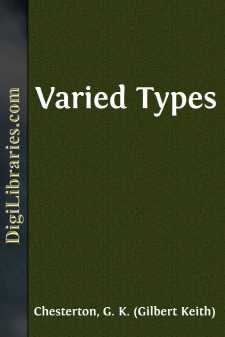 Objection is often raised against realistic biography because it reveals so much that is important and even sacred about a man's life. The real objection to it will rather be found in the fact that it reveals about a man the precise points which are unimportant. It reveals and asserts and insists on exactly those things in a man's life of which the man himself is wholly unconscious; his exact class in society, the circumstances of his ancestry, the place of his present location. These are things which do not, properly speaking, ever arise before the human vision. They do not occur to a man's mind; it may be said, with almost equal truth, that they do not occur in a man's life. A man no more thinks about himself as the inhabitant of the third house in a row of Brixton villas than he thinks about himself as a strange animal with two legs. What a man's name was, what his income was, whom he married, where he lived, these are not sanctities; they are irrelevancies.

A very strong case of this is the case of the Brontës. The Brontë is in the position of the mad lady in a country village; her eccentricities form an endless source of innocent conversation to that exceedingly mild and bucolic circle, the literary world. The truly glorious gossips of literature, like Mr. Augustine Birrell and Mr. Andrew Lang, never tire of collecting all the glimpses and anecdotes and sermons and side-lights and sticks and straws which will go to make a Brontë museum. They are the most personally discussed of all Victorian authors, and the limelight of biography has left few darkened corners in the dark old Yorkshire house. And yet the whole of this biographical investigation, though natural and picturesque, is not wholly suitable to the Brontës. For the Brontë genius was above all things deputed to assert the supreme unimportance of externals. Up to that point truth had always been conceived as existing more or less in the novel of manners. Charlotte Brontë electrified the world by showing that an infinitely older and more elemental truth could be conveyed by a novel in which no person, good or bad, had any manners at all. Her work represents the first great assertion that the humdrum life of modern civilisation is a disguise as tawdry and deceptive as the costume of a bal masqué. She showed that abysses may exist inside a governess and eternities inside a manufacturer; her heroine is the commonplace spinster, with the dress of merino and the soul of flame. It is significant to notice that Charlotte Brontë, following consciously or unconsciously the great trend of her genius, was the first to take away from the heroine not only the artificial gold and diamonds of wealth and fashion, but even the natural gold and diamonds of physical beauty and grace. Instinctively she felt that the whole of the exterior must be made ugly that the whole of the interior might be made sublime. She chose the ugliest of women in the ugliest of centuries, and revealed within them all the hells and heavens of Dante.

It may, therefore, I think, be legitimately said that the externals of the Brontës' life, though singularly picturesque in themselves, matter less than the externals of almost any other writers. It is interesting to know whether Jane Austen had any knowledge of the lives of the officers and women of fashion whom she introduced into her masterpieces. It is interesting to know whether Dickens had ever seen a shipwreck or been inside a workhouse. For in these authors much of the conviction is conveyed, not always by adherence to facts, but always by grasp of them. But the whole aim and purport and meaning of the work of the Brontës is that the most futile thing in the whole universe is fact....