Valere Aude Dare to Be Healthy, Or, The Light of Physical Regeneration 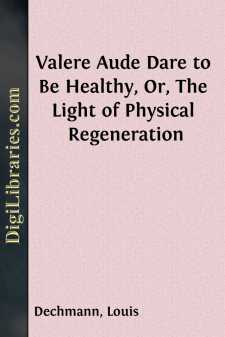 Hessiod, in his celebrated distribution of mankind, divides the species into three orders of intellect.

"The first place," says he, "belongs to him who can, by his own powers, discern what is fit and right, and penetrate to the remoter motives of action.

"The second place is claimed by him who is willing to hear instruction and can perceive right and wrong when they are shown to him by another;—but he who hath neither acuteness nor docility—who can neither find the way by himself, nor will be led by others, is a wretch without use or value."

"You are seeking truth," quoth Adalbert von Chamisso, "Remember that the world clings more firmly to superstition than to faith,"—or, to borrow expression from an equally inspired source,—remember that perverse humanity rarely fails to favour, rather, what Shakespeare terms "The seeming truth which cunning times put on to entrap the wisest."

Courageous, then, must be the knight who sets his lance in rest to tilt against the windmills of the world.

Nevertheless, although the truth is still banned as "heterodox" by common consent—or tacit connivance—an attitude patent to commercial instincts in view of the cataclysm which must naturally ensue, with deadly results to the vested interests of orthodoxy, so soon as the long-trusted barriers of plausible and pretentious mystery and importance shall be swept away by the rising tide of popular indignation. When the masses become educated to discriminate between truth and falsehood and thus shall come into their rights, then and not till then, will the dawn of physical salvation break.

Still, I maintain, there are, and have been all along the way, eminent medical men of high intelligence, who, unlike the drones of the medical hive, have dared to think for themselves and have even dared to speak their thoughts.

Thus, for instance, spoke Sir William W. Gull, Physician to her late Majesty Queen Victoria: "Having passed the period of the goldheaded cane and horsehair wig, we dare hope to have also passed the days of pompous emptiness; and furthermore, we can hope that nothing will be considered unworthy the attention of physicians which contributes to the saving of life."

Again, an authority of the first rank, Prof. Oesterlin, says in his noted work on the Materia Medica:

"The studious physician of our century will hardly expect to accomplish by force, through some strange drug or other, that which only nature can bring about when assisted by all the rational accessories of hygiene and dietetics.

Nature alone can furnish the beneficient means, sufficient for all needs,"—which the science of medicine never has afforded and never can.

As we survey the civilization of our age and its medical science, we see, on the one hand, the crude superstitions of the masses, the subtler superstitions of the educated classes; gross materialism, bewildering Darwinism, pessimism, and degenerate political economy; on the other hand, unmitigated quackery and cupidity, with its weight of oppression on humanity,—everywhere confusion instead of harmony.

Very surely,—and perhaps more speedily than we think—a reaction will come, when our present degenerate system of medical subterfuge—misnamed science—will have passed away, to be replaced by accredited methods of natural healing consistent with the dignity of an enlightened, self-respecting people.

"Ignorance is the curse of God:Knowledge the wing wherewith we fly to heaven" (Shakespeare) THE HYGIENIC-DIETETIC METHOD OF HEALING

Biology, the Science of life, has developed under my hand that system of natural healing which I practice, in common with some of the most successful physicians on the continents of Europe and America....