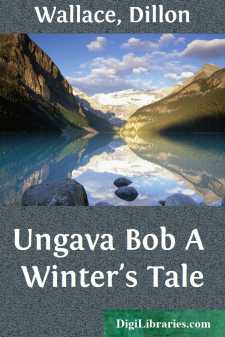 UNGAVA BOB I HOW BOB GOT HIS "TRAIL"

It was an evening in early September twenty years ago. The sun was just setting in a radiance of glory behind the dark spruce forest that hid the great unknown, unexplored Labrador wilderness which stretched away a thousand miles to the rocky shores of Hudson's Bay and the bleak desolation of Ungava. With their back to the forest and the setting sun, drawn up in martial line stood the eight or ten whitewashed log buildings of the Hudson's Bay Company Post, just as they had stood for a hundred years, and just as they stand to-day, looking out upon the wide waters of Eskimo Bay, which now, reflecting the glow of the setting sun, shone red and sparkling like a sea of rubies.

On a clearing to the eastward of the post between the woods and water was an irregular cluster of deerskin wigwams, around which loitered dark-hued Indians puffing quietly at their pipes, while Indian women bent over kettles steaming at open fires, cooking the evening meal, and little Indian boys with bows shot harmless arrows at soaring gulls overhead, and laughed joyously at their sport as each arrow fell short of its mark. Big wolf dogs skulked here and there, looking for bits of refuse, snapping and snarling ill-temperedly at each other.

A group of stalwart, swarthy-faced men, dressed in the garb of northern hunters—light-coloured moleskin trousers tucked into the tops of long-legged sealskin moccasins, short jackets and peakless caps—stood before the post kitchen or lounged upon the rough board walk which extended the full length of the reservation in front of the servants' quarters and storehouses. They were watching a small sailboat that, half a mile out upon the red flood, was bowling in before a smart breeze, and trying to make out its single occupant. Finally some one spoke.

Their curiosity satisfied, all but two strolled into the kitchen, where supper had been announced.

Douglas Campbell, the older of the two that remained, was a short, stockily built man with a heavy, full, silver-white beard, and skin tanned dark as an Indian's by the winds and storms of more than sixty years. A pair of kindly blue eyes beneath shaggy white eyebrows gave his face an appearance at once of strength and gentleness, and an erect bearing and well-poised head stamped him a leader and a man of importance.

The other was a tall, wiry, half-breed Indian, with high cheek bones and small, black, shifting eyes that were set very close together and imparted to the man a look of craftiness and cunning. He was known as "Micmac John," but said his real name was John Sharp. He had drifted to the coast a couple of years before on a fishing schooner from Newfoundland, whence he had come from Nova Scotia. From the coast he had made his way the hundred and fifty miles to the head of Eskimo Bay, and there took up the life of a trapper. Rumour had it that he had committed murder at home and had run away to escape the penalty; but this rumour was unverified, and there was no means of learning the truth of it....