Under the Waves Diving in Deep Waters 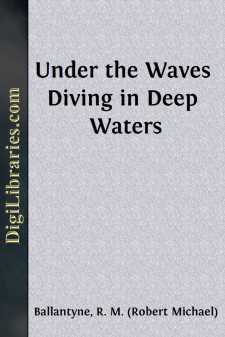 This tale makes no claim to the character of an exhaustive illustration of all that belongs to the art of diving. It merely deals with the most important points, and some of the most interesting incidents connected therewith. In writing it I have sought carefully to exhibit the true and to ignore the false or improbable.

I have to acknowledge myself indebted to the well-known submarine engineers Messrs Siebe and Gorman, and Messrs Heinke and Davis, of London, for much valuable information; and to Messrs Denayrouze, of Paris, for permitting me to go under water in one of their diving-dresses. Also—among many others—to Captain John Hewat, formerly Commander in the service of the Rajah of Sarawak, for much interesting material respecting the pirates of the Eastern Seas.

Chapter One. Introduces our Hero, one of his Advisers, and some of his Difficulties.

“So, sir, it seems that you’ve set your heart on learning something of everything?”

The man who said this was a tall and rugged professional diver. He to whom it was said was Edgar Berrington, our hero, a strapping youth of twenty-one.

“Well—yes, I have set my heart upon something of that sort, Baldwin,” answered the youth. “You see, I hold that an engineer ought to be practically acquainted, more or less, with everything that bears, even remotely, on his profession; therefore I have come to you for some instruction in the noble art of diving.”

“You’ve come to the right shop, Mister Edgar,” replied Baldwin, with a gratified look. “I taught you to swim when you wasn’t much bigger than a marlinespike, an’ to make boats a’most before you could handle a clasp-knife without cuttin’ your fingers, an’ now that you’ve come to man’s estate nothin’ll please me more than to make a diver of you. But,” continued Baldwin, while a shade clouded his wrinkled and weatherbeaten visage, “I can’t let you go down in the dress without leave. I’m under authority, you know, and durstn’t overstep—”

“Don’t let that trouble you,” interrupted his companion, drawing a letter from his pocket; “I had anticipated that difficulty, and wrote to your employers. Here is their answer, granting me permission to use their dresses.”

“All right, sir,” said Baldwin, returning the letter without looking at it; “I’ll take your word for it, sir, as it’s not much in my line to make out the meanin’ o’ pot-hooks and hangers.—Now, then, when will you have your first lesson?”

“The sooner the better.”

“Just so,” said the diver, looking about him with a thoughtful air.

The apartment in which the man and the youth conversed was a species of out-house or lumber-room which had been selected by Baldwin for the stowing away of his diving apparatus and stores while these were not in use at the new pier which was in process of erection in the neighbouring harbour. Its floor was littered with snaky coils of india-rubber tubing; enormous boots with leaden soles upwards of an inch thick; several diving helmets, two of which were of brightly polished metal, while the others were more or less battered, dulled, and dinted by hard service in the deep. The walls were adorned with large damp india-rubber dresses, which suggested the idea of baby-giants who had fallen into the water and been sent off to bed while their costumes were hung up to dry....