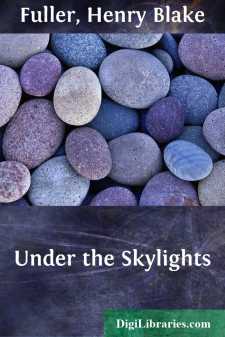 With the publication of his first book, This Weary World, Abner Joyce immediately took a place in literature. Or rather, he made it; the book was not like other books, and readers felt the field of fiction to be the richer by one very vital and authentic personality.

This Weary World was grim and it was rugged, but it was sincere and it was significant. Abner's intense earnestness had left but little room for the graces;—while he was bent upon being recognised as a "writer," yet to be a mere writer and nothing more would not have satisfied him at all. Here was the world with its many wrongs, with its numberless crying needs; and the thing for the strong young man to do was to help set matters right. This was a simple enough task, were it but approached with courage, zeal, determination. A few brief years, if lived strenuously and intensely, would suffice. "Man individually is all right enough," said Abner; "it is only collectively that he is wrong." What was at fault was the social scheme,—the general understanding, or lack of understanding. A short sharp hour's work before breakfast would count for a hundred times more than a feeble dawdling prolonged throughout the whole day. Abner rose betimes and did his hour's work; sweaty, panting, begrimed, hopeful, indignant, sincere, self-confident, he set his product full in the world's eye.

Abner's book comprised a dozen short stories—twelve clods of earth gathered, as it were, from the very fields across which he himself, a farmer's boy, had once guided the plough. The soil itself spoke, the intimate, humble ground; warmed by his own passionate sense of right, it steamed incense-like aloft and cried to the blue skies for justice. He pleaded for the farmer, the first, the oldest, the most necessary of all the world's workers; for the man who was the foundation of civilized society, yet who was yearly gravitating downward through new depths of slighting indifference, of careless contempt, of rank injustice and gross tyranny; for the man who sowed so plenteously, so laboriously, yet reaped so scantily and in such bitter and benumbing toil; for the man who lived indeed beneath the heavens, yet must forever fasten his solicitous eye upon the earth. All this revolted Abner; the indignation of a youth that had not yet made its compromise with the world burned on every page. Some of his stories seemed written not so much by the hand as by the fist, a fist quivering from the tension of muscles and sinews fully ready to act for truth and right; and there were paragraphs upon which the intent and blazing eye of the writer appeared to rest with no less fierceness, coldly printed as they were, than it had rested upon the manuscript itself.

A few of those who read his book happened to meet him personally, and one or two of this number—clever but inconspicuous people—lucidly apprehended him for what he was: that rare phenomenon, the artist (such he was already calling himself)—the artist whose personality, whose opinions and whose work are in exact accord....