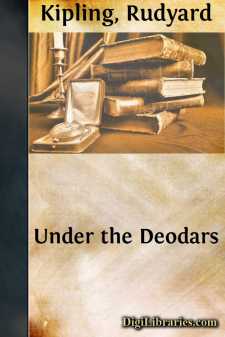 This is the history of a failure; but the woman who failed said that it might be an instructive tale to put into print for the benefit of the younger generation. The younger generation does not want instruction, being perfectly willing to instruct if any one will listen to it. None the less, here begins the story where every right-minded story should begin, that is to say at Simla, where all things begin and many come to an evil end.

The mistake was due to a very clever woman making a blunder and not retrieving it. Men are licensed to stumble, but a clever woman's mistake is outside the regular course of Nature and Providence; since all good people know that a woman is the only infallible thing in this world, except Government Paper of the '79 issue, bearing interest at four and a half per cent. Yet, we have to remember that six consecutive days of rehearsing the leading part of The Fallen Angel, at the New Gaiety Theatre where the plaster is not yet properly dry, might have brought about an unhingement of spirits which, again, might have led to eccentricities.

Mrs. Hauksbee came to 'The Foundry' to tiffin with Mrs. Mallowe, her one bosom friend, for she was in no sense 'a woman's woman.' And it was a woman's tiffin, the door shut to all the world; and they both talked chiffons, which is French for Mysteries.

'I've enjoyed an interval of sanity,' Mrs. Hauksbee announced, after tiffin was over and the two were comfortably settled in the little writing-room that opened out of Mrs. Mallowe's bedroom.

'My dear girl, what has he done?' said Mrs. Mallowe sweetly. It is noticeable that ladies of a certain age call each other 'dear girl,' just as commissioners of twenty-eight years' standing address their equals in the Civil List as 'my boy.'

'There's no he in the case. Who am I that an imaginary man should be always credited to me? Am I an Apache?'

'No, dear, but somebody's scalp is generally drying at your wigwam-door. Soaking rather.'

This was an allusion to the Hawley Boy, who was in the habit of riding all across Simla in the Rains, to call on Mrs. Hauksbee. That lady laughed.

'For my sins, the Aide at Tyrconnel last night told me off to The Mussuck. Hsh! Don't laugh. One of my most devoted admirers. When the duff came some one really ought to teach them to make puddings at Tyrconnel The Mussuck was at liberty to attend to me.'

'Sweet soul! I know his appetite,' said Mrs. Mallowe. 'Did he, oh did he, begin his wooing?'

'By a special mercy of Providence, no. He explained his importance as a Pillar of the Empire. I didn't laugh.'

'Ask Captain Sangar; he was on the other side. Well, as I was saying, The Mussuck dilated.'

'I think I can see him doing it,' said Mrs. Mallowe pensively, scratching her fox-terrier's ears.

'I was properly impressed. Most properly. I yawned openly....