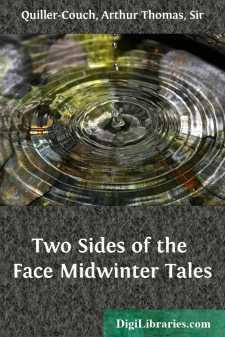 A Tale of Wild Justice. I.

Beside a high-road in the extreme West of England stands a house which you might pass many times without suspecting it of a dark history or, indeed, any history worth mention. The country itself, which here slopes westward from the Mining District to Mount's Bay, has little beauty and—unless you happen to have studied it—little interest. It is bare, and it comes near to be savage without attaining to the romantic. It includes, to be sure, one or two spots of singular beauty; but they hide themselves and are not discoverable from the road, which rewards you only by its extravagant wealth of wild flowers, its clean sea-breeze, and perhaps a sunset flaming across the low levels and silhouetting the long shoulder of Godolphin Hill between you and the Atlantic, five miles distant.

Noting, as you passed, the size of the house, its evident marks of age, and the meanness of its more modern outbuildings, you would set it down for the residence of an old yeoman family fallen on evil days. And your second thought—if it suggested a second—might be that these old yeomen, not content with a lonely dwelling in a lonely angle of the land, had churlishly built themselves in and away from sight even of the infrequent traveller; for a high wall enclosing a courtlage in front screens all but the upper story with its slated roof, heavy chimneys and narrow upper windows; and these again are half hidden by the boughs of two ragged yew trees growing within the enclosure. Behind the house, on a rising slope, tilled fields have invaded a plantation of noble ash trees and cut it back to a thin and ugly quadrilateral. Ill-kept as they are, and already dilapidated, the modern farm-buildings wear a friendlier look than the old mansion, and by contrast a cheerful air, as of inferiors out-at-elbows, indeed, but unashamed, having no lost dignities to brood upon.

Yet it may happen that your driver—reading, as he thinks, some curiosity in your glance at Steens (for so the house is called), or politely anxious to beguile the way—pulls up his horse and with a jerk of his whip draws your attention to certain pock-marks in the courtlage wall. Or perhaps, finding you really curious but unable from your seat in the vehicle to distinguish them, he dismounts and traces them out for you with the butt of his whip-handle. They are bullet-marks, he says, and there are plenty of others on the upper front of the house within—even grooves cut by bullets in the woodwork of the windows. Then follows a story which you will find some difficulty in swallowing. That in 1734, when Walpole was keeping England at peace—that almost at the moment when he boasted, "There are fifty thousand men slain this year in Europe, and not one Englishman,"—an unmilitary pewterer was here holding at bay the Sheriff, his posse and half a regiment of soldiers, slaying seven and wounding many; and that for eight months he defied the law and defended himself, until cannon had to be dragged over the roads from Pendennis Castle to quell him—such a tale may well seem incredible to you unless you can picture the isolation of Cornwall in days when this highway was a quag through which, perhaps twice a week, a train of pack-horses floundered....