Two Ghostly Mysteries A Chapter in the History of a Tyrone Family; and the Murdered Cousin 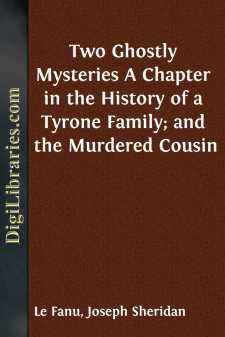 A CHAPTER IN THE HISTORY OF A TYRONE FAMILY

Being a Tenth Extract from the Legacy of the Late Francis Purcell,P.P. of Drumcoolagh

INTRODUCTION. In the following narrative, I have endeavoured to give as nearly as possible the "ipsissima verba" of the valued friend from whom I received it, conscious that any aberration from her mode of telling the tale of her own life, would at once impair its accuracy and its effect. Would that, with her words, I could also bring before you her animated gesture, her expressive countenance, the solemn and thrilling air and accent with which she related the dark passages in her strange story; and, above all, that I could communicate the impressive consciousness that the narrator had seen with her own eyes, and personally acted in the scenes which she described; these accompaniments, taken with the additional circumstance, that she who told the tale was one far too deeply and sadly impressed with religious principle, to misrepresent or fabricate what she repeated as fact, gave to the tale a depth of interest which the events recorded could hardly, themselves, have produced. I became acquainted with the lady from whose lips I heard this narrative, nearly twenty years since, and the story struck my fancy so much, that I committed it to paper while it was still fresh in my mind, and should its perusal afford you entertainment for a listless half hour, my labour shall not have been bestowed in vain. I find that I have taken the story down as she told it, in the first person, and, perhaps, this is as it should be. She began as follows.

My maiden name was Richardson,[A] the designation of a family of some distinction in the county of Tyrone. I was the younger of two daughters, and we were the only children. There was a difference in our ages of nearly six years, so that I did not, in my childhood, enjoy that close companionship which sisterhood, in other circumstances, necessarily involves; and while I was still a child, my sister was married. The person upon whom she bestowed her hand, was a Mr. Carew, a gentleman of property and consideration in the north of England. I remember well the eventful day of the wedding; the thronging carriages, the noisy menials, the loud laughter, the merry faces, and the gay dresses. Such sights were then new to me, and harmonized ill with the sorrowful feelings with which I regarded the event which was to separate me, as it turned out, for ever, from a sister whose tenderness alone had hitherto more than supplied all that I wanted in my mother's affection. The day soon arrived which was to remove the happy couple from Ashtown-house. The carriage stood at the hall-door, and my poor sister kissed me again, and again, telling me that I should see her soon. The carriage drove away, and I gazed after it until my eyes filled with tears, and, returning slowly to my chamber, I wept more bitterly, and so, to speak more desolately, than ever I had done before. My father had never seemed to love, or to take an interest in me. He had desired a son, and I think he never thoroughly forgave me my unfortunate sex....