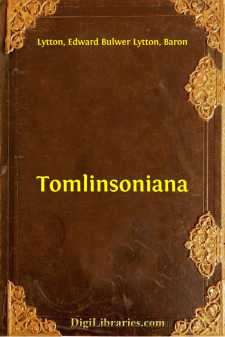 Set a thief to catch a thief.—-Proverb. I.

Whenever you are about to utter something astonishingly false, always begin with, "It is an acknowledged fact," etc. Sir Robert Filmer was a master of this method of writing. Thus, with what a solemn face that great man attempted to cheat! "It is a truth undeniable that there cannot be any multitude of men whatsoever, either great or small, etc., but that in the same multitude there is one man amongst them that in nature hath a right to be King of all the rest,—as being the next heir to Adam!"

When you want something from the public, throw the blame of the asking on the most sacred principle you can find. A common beggar can read you exquisite lessons on this the most important maxim in the art of popular cheating. "For the love of God, sir, a penny!"

Whenever on any matter, moral, sentimental, or political, you find yourself utterly ignorant, talk immediately of "The Laws of Nature." As those laws are written nowhere,—[Locke]—they are known by nobody. Should any ask you how you happen to know such or such a doctrine as the dictate of Nature, clap your hand to your heart and say, "Here!"

Yield to a man's tastes, and he will yield to your interest.

Always bear in mind, my beloved pupils, that the means of livelihood depend not on the virtues, but the vices of others. The lawyer, the statesman, the hangman, the physician, are paid by our sins; nay, even the commoner professions—the tailor, the coachmaker, the upholsterer, the wine-merchant—draw their fortunes, if not their existence, from those smaller vices, our foibles. Vanity is the figure prefixed to the ciphers of Necessity. Wherefore, oh my beloved pupils! never mind what a man's virtues are; waste no time in learning them. Fasten at once on his infirmities. Do to the One as, were you an honest man, you would do to the Many. This is the way to be a rogue individually, as a lawyer is a rogue professionally. Knaves are like critics,—[Nullum simile est quod idem.—EDITOR.]—"flies that feed on the sore part, and would have nothing to live on were the body in health."—[Tatler].

Every man finds it desirable to have tears in his eyes at times,—one has a sympathy with humid lids. Providence hath beneficially provided for this want, and given to every man, in its divine forethought, misfortunes painful to recall. Hence, probably, those human calamities which the atheist rails against! Wherefore, when you are uttering some affecting sentiment to your intended dupe, think of the greatest misfortune you ever had in your life; habit will soon make the association of tears and that melancholy remembrance constantly felicitous. I knew, my dear pupils, a most intelligent Frenchman, who obtained a charming legacy from an old poet by repeating the bard's verses with streaming eyes. "How were you able to weep at will?" asked I (I was young then, my pupils)....