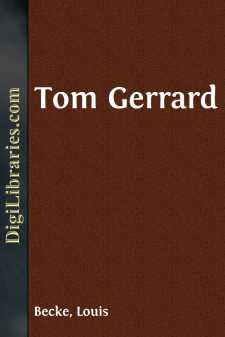 "Hallo! young lady, what on earth are you doing here?" and Gerrard bent down over his horse's shoulder, and looked inquiringly into the face of a small and exceedingly ill-clad girl of about ten years of age.

"Nothing, sir, I only came out for a walk, and to get some pippies."

"And where do you get them?"

"Down there, sir, on the sand," and the child pointed with a strong, sun-browned hand to the beach, which was within a mile.

"Yes—they're lovely. Jim and I roast them in the stockman's kitchen when auntie has gone to bed."

Gerrard dismounted, and tying his reins to a stirrup, let his horse graze. Then taking his pipe out of his pocket, he filled and lit it, and motioned to the child to sit down beside him upon a fallen honeysuckle tree.

"What is your auntie's name, my dear?" and he took the child's hand in his.

"Ah! I thought so. Now, did you ever hear her talk of an Uncle Tom?"

"Yes, sir," replied the child, wonderingly, "he's a cattleman in the Northern Territory."

"All the way from Cape York! Why! Uncle Westonley says it's two thousand miles from here."

"So it is, my dear," and the man stroked the child's tousled chestnut hair caressingly; "quite two thousand miles," and then as he looked at her pityingly he muttered something very uncomplimentary to Aunt Elizabeth.

"Are you really my uncle Thomas Gerrard?"

"I am really your Uncle Tom Gerrard, and you are my niece Mary. Your mother was my sister, whose name was Mary."

"Does he?" and the young man's kindly grey eyes smiled as he stroked his pointed beard. "Good old Ted!"

"Your Uncle Westonley, of course. Don't you call him 'Uncle Ted'?"

"Oh, no!" and the child's big eyes looked startlingly into his, "I call him 'Uncle Westonley.' Aunt Elizabeth said I must never say 'Uncle Ted,' as it's vulgar, and she won't allow it, and uncle says I must be obedient to her."

Gerrard put out his right arm, drew her to him, and looked intently into her face. In her dreamy, violet-hued eyes, with the dark pencilled brows, and the small delicate mouth, he saw the image of his dead twin-sister, Mary.

"Poor little mite!" he again said to himself pityingly, as he looked at her coarse though not ill-kept clothing, "Lizzie always was a cold-hearted prig, and always will be to the end of her days—even in her moribund moments. How could she let this child wander out so far away from the station." Then he took two or three great puffs at his pipe. "How far is it to Marumbah, little niece Mary?"

"But you must not say 'sir' to me. I'm your uncle. And you must call me 'Uncle Tom.' Understand?"

"Aunt Elizabeth insists on my saying 'sir' to gentlemen."

"Does she now? Well, my dear, you must never say 'sir' to me—I'll ask Aunt Elizabeth not to insist on your calling me 'sir.' You see I shouldn't like it I want you to call me 'Uncle Tom.' Lots of people call me Tom....