Time's Portraiture (From: "The Doliver Romance and Other Pieces: Tales and Sketches") 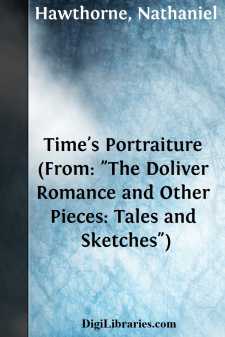 Kind Patrons:—-We newspaper carriers are Time's errand-boys; and all the year round, the old gentleman sends us from one of your doors to another, to let you know what he is talking about and what he is doing. We are a strange set of urchins; for, punctually on New Year's morning, one and all of us are seized with a fit of rhyme, and break forth in such hideous strains, that it would be no wonder if the infant Year, with her step upon the threshold, were frightened away by the discord with which we strive to welcome her. On these occasions, most generous patrons, you never fail to give us a taste of your bounty; but whether as a reward for our verses, or to purchase a respite from further infliction of them, is best known to your worshipful selves. Moreover, we, Time's errand-boys as aforesaid, feel it incumbent upon us, on the first day of every year, to present a sort of summary of our master's dealings with the world, throughout the whole of the preceding twelvemonth. Now it has so chanced by a misfortune heretofore unheard of, that I, your present petitioner, have been altogether forgotten by the Muse. Instead of being able (as I naturally expected) to measure my ideas into six-foot lilies, and tack a rhyme at each of their tails, I find myself, this blessed morning, the same simple proser that I was yesterday, and shall probably be to-morrow. And to my further mortification, being a humble-minded little sinner, I feel no wise capable of talking to your worships with the customary wisdom of my brethren, and giving sage opinions as to what Time has done right, and what he has done wrong, and what of right or wrong he means to do hereafter. Such being my unhappy predicament, it is with no small confusion of face, that I make bold to present myself at your doors. Yet it were surely a pity that my non-appearance should defeat your bountiful designs for the replenishing of my pockets. Wherefore I have bethought me, that it might not displease your worships to hear a few particulars about the person and habits of Father Time, with whom, as being one of his errand-boys, I have more acquaintance than most lads of my years.

For a great many years past, there has been a woodcut on the cover of the "Farmer's Almanac," pretending to be a portrait of Father Time. It represents that respectable personage as almost in a state of nudity, with a single lock of hair on his forehead, wings on his shoulders, and accoutred with a scythe and an hour-glass. These two latter symbols appear to betoken that the old fellow works in haying time, by the hour. But, within my recollection, Time has never carried a scythe and an hour-glass, nor worn a pair of wings, nor shown himself in the half-naked condition that the almanac would make us believe. Nowadays, he is the most fashionably dressed figure about town; and I take it to be his natural disposition, old as he is, to adopt every fashion of the day and of the hour. Just at the present period, you may meet him in a furred surtout, with pantaloons strapped under his narrow-toed boots; on his head, instead of a single forelock, he wears a smart auburn wig, with bushy whiskers of the same hue, the whole surmounted by a German-lustre hat. He has exchanged his hour-glass for a gold patent-lever watch, which he carries in his vest-pocket; and as for his scythe, he has either thrown it aside altogether, or converted its handle into a cane not much stouter than a riding-switch. If you stare him full in the face, you will perhaps detect a few wrinkles; but, on a hasty glance, you might suppose him to be in the very heyday of life, as fresh as he was in the garden of Eden. So much for the present aspect of Time; but I by no means insure that the description shall suit him a month hence, or even at this hour tomorrow.

It is another very common mistake, to suppose that Time wanders among old ruins, and sits on mouldering walls and moss-grown stones, meditating about matters which everybody else has forgotten. Some people, perhaps, would expect to find him at the burial-ground in Broad Street, poring over the half-illegible inscriptions on the tombs of the Higginsons, the Hathornes,—[Not "Hawthorne," as one of the present representatives of the family has seen fit to transmogrify a good old name.]—the Holyokes, the Brownes, the Olivers, the Pickmans, the Pickerings, and other worthies, with whom he kept company of old. Some would look for him on the ridge of Gallows Hill, where, in one of his darkest moods, he and Cotton Mather hung the witches. But they need not seek him there. Time is invariably the first to forget his own deeds, his own history, and his own former associates. His place is in the busiest bustle of the world. If you would meet Time face to face, you have only to promenade in Essex Street, between the hours of twelve and one; and there, among beaux and belles, you will see old Father Time, apparently the gayest of the gay. He walks arm in arm with the young men, talking about balls and theatres, and afternoon rides, and midnight merry-makings; he recommends such and such a fashionable tailor, and sneers at every garment of six months' antiquity; and, generally, before parting, he invites his friends to drink champagne,—a wine in which Time delights, on account of its rapid effervescence....