Through the Iron Bars Two Years of German Occupation in Belgium 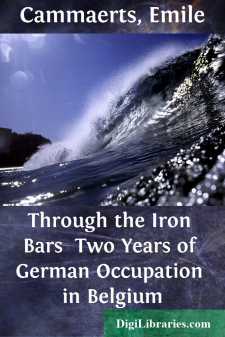 I. THE PRISON GATES.

The English-speaking public is generally well informed concerning the part played in the war by the Belgian troops. The resistance of our small field army at Liège, before Antwerp, and on the Yser has been praised and is still being praised wherever the tale runs. This is easy enough to understand. The fact that those 100,000 men should have been able to hold so long in check the forces of the first military Empire in Europe, and that a great number of them, helped by new contingents of recruits and led by their young King, should still be fighting on their native soil, must appeal strongly to the imagination.

If it be told how the new Belgian army, reorganised and re-equipped after the terrible ordeal on the Yser, is at the present moment much stronger than at the beginning of the war, how it has been able lately to extend its front in Flanders, and how some of its units have rendered valuable help to the cause of the Allies in East Africa and even in Galicia, the story sounds like a fairy tale. There is, in the history of this unequal struggle, the true ring of legendary heroism; it seems an echo of the tale of David and Goliath, or of Jack the Giant Killer; it is full of the triumph of the spirit over the flesh, of independence and free will over fatalism and brute force, of Right over Might.

I feel confident that some day a poet will be able to sing this great epic in verses which shall answer to the swinging rhythm of battle and roll with the booming of a thousand guns. But, in the meantime, I should like to say a few words about a much humbler, a much simpler, a much more familiar subject. It awakes no classical remembrances of Leonidas or Marathon. My heroes risk their lives, but they are not soldiers, merely prosaic "bourgeois" and workmen. They have no weapon, they cannot fight. They have only to remain cheery in adversity and patient in the face of taunts. They cannot render blow for blow, they have no sword to flourish against an insolent conqueror. They can only oppose a stout heart, a loyal spirit, and an ironic smile to the persecutions to which they are subjected. They can do nothing—they must do nothing—only hope and wait. But there are as much heroism and beauty in their black frock-coats and their soiled workmen's smocks as in the gayest and most glittering uniforms.

It is the plain matter-of-fact story of Belgian life under German rule. Many more people will be tempted to praise the glory of our soldiers. But, if the incidents of conquered Belgium's life are not recorded in good time, they might escape notice. People might forget that, besides the 150,000 to 200,000 heroes who are now waging war for Belgium on the Western front, there are 7,500,000 heroes who are suffering for Belgium behind the German lines, in the close prison of guarded frontiers, cut off from the whole world, separated alike from those who are fighting for their deliverance and from those who have sought refuge abroad.

These are the people whom America, England, Spain, and many generous people in other allied and neutral countries have tried to save from material starvation....