Through the Eye of the Needle A Romance 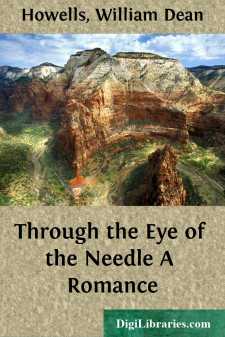 Aristides Homos, an Emissary of the Altrurian Commonwealth, visited the United States during the summer of 1893 and the fall and winter following. For some weeks or months he was the guest of a well-known man of letters at a hotel in one of our mountain resorts; in the early autumn he spent several days at the great Columbian Exhibition in Chicago; and later he came to New York, where he remained until he sailed, rather suddenly, for Altruria, taking the circuitous route by which he came. He seems to have written pretty constantly throughout his sojourn with us to an intimate friend in his own country, giving freely his impressions of our civilization. His letters from New York appear to have been especially full, and, in offering the present synopsis of these to the American reader, it will not be impertinent to note certain peculiarities of the Altrurian attitude which the temperament of the writer has somewhat modified. He is entangled in his social sophistries regarding all the competitive civilizations; he cannot apparently do full justice to the superior heroism of charity and self-sacrifice as practised in countries where people live upon each other as the Americans do, instead of for each other as the Altrurians do; but he has some glimmerings of the beauty of our living, and he has undoubtedly the wish to be fair to our ideals. He is unable to value our devotion to the spirit of Christianity amid the practices which seem to deny it; but he evidently wishes to recognize the possibility of such a thing. He at least accords us the virtues of our defects, and, among the many visitors who have censured us, he has not seen us with his censures prepared to fit the instances; in fact, the very reverse has been his method.

Many of the instances which he fits with his censures are such as he could no longer note, if he came among us again. That habit of celebrating the munificence of the charitable rich, on which he spends his sarcasm, has fallen from us through the mere superabundance of occasion. Our rich people give so continuously for all manner of good objects that it would be impossible for our press, however vigilant, to note the successive benefactions, and millions are now daily bestowed upon needy educational institutions, of which no mention whatever is made in the newspapers. If a millionaire is now and then surprised in a good action by a reporter of uncommon diligence, he is able by an appeal to their common humanity to prevail with the witness to spare him the revolting publicity which it must be confessed would once have followed his discovery; the right hand which is full to overflowing is now as skilled as the empty right hand in keeping the left hand ignorant of its doings. This has happened through the general decay of snobbishness among us, perhaps. It is certain that there is no longer the passion for a knowledge of the rich, and the smart, which made us ridiculous to Mr. Homos. Ten or twelve years ago, our newspapers abounded in intelligence of the coming and going of social leaders, of their dinners and lunches and teas, of their receptions and balls, and the guests who were bidden to them. But this sort of unwholesome and exciting gossip, which was formerly devoured by their readers with inappeasable voracity, is no longer supplied, simply because the taste for it has wholly passed away.

Much the same might be said of the social hospitalities which raised our visitor's surprise. For example, many people are now asked to dinner who really need a dinner, and not merely those who revolt from the notion of dinner with loathing, and go to it with abhorrence. At the tables of our highest social leaders one now meets on a perfect equality persons of interesting minds and uncommon gifts who would once have been excluded because they were hungry, or were not in the hostess's set, or had not a new gown or a dress-suit. This contributes greatly to the pleasure of the time, and promotes the increasing kindliness between the rich and poor for which our status is above all things notable.

The accusation which our critic brings that the American spirit has been almost Europeanized away, in its social forms, would be less grounded in the observance of a later visitor. The customs of good society must be the same everywhere in some measure, but the student of the competitive world would now find European hospitality Americanized, rather than. American hospitality Europeanized. The careful research which has been made into our social origins has resulted in bringing back many of the aboriginal usages; and, with the return of the old American spirit of fraternity, many of the earlier dishes as well as amenities have been restored. A Thanksgiving dinner in the year 1906 would have been found more like a Thanksgiving dinner in 1806 than the dinner to which Mr....