Three short works The Dance of Death, the Legend of Saint Julian the Hospitaller, a Simple Soul. 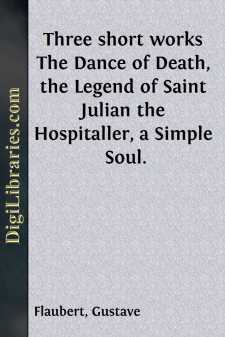 CHAPTER I THE CURSE

Julian's father and mother dwelt in a castle built on the slope of a hill, in the heart of the woods.

The towers at its four corners had pointed roofs covered with leaden tiles, and the foundation rested upon solid rocks, which descended abruptly to the bottom of the moat.

In the courtyard, the stone flagging was as immaculate as the floor of a church. Long rain-spouts, representing dragons with yawning jaws, directed the water towards the cistern, and on each window-sill of the castle a basil or a heliotrope bush bloomed, in painted flower-pots.

A second enclosure, surrounded by a fence, comprised a fruit-orchard, a garden decorated with figures wrought in bright-hued flowers, an arbour with several bowers, and a mall for the diversion of the pages. On the other side were the kennel, the stables, the bakery, the wine-press and the barns. Around these spread a pasture, also enclosed by a strong hedge.

Peace had reigned so long that the portcullis was never lowered; the moats were filled with water; swallows built their nests in the cracks of the battlements, and as soon as the sun shone too strongly, the archer who all day long paced to and fro on the curtain, withdrew to the watch-tower and slept soundly.

Inside the castle, the locks on the doors shone brightly; costly tapestries hung in the apartments to keep out the cold; the closets overflowed with linen, the cellar was filled with casks of wine, and the oak chests fairly groaned under the weight of money-bags.

In the armoury could be seen, between banners and the heads of wild beasts, weapons of all nations and of all ages, from the slings of the Amalekites and the javelins of the Garamantes, to the broad-swords of the Saracens and the coats of mail of the Normans.

The largest spit in the kitchen could hold an ox; the chapel was as gorgeous as a king's oratory. There was even a Roman bath in a secluded part of the castle, though the good lord of the manor refrained from using it, as he deemed it a heathenish practice.

Wrapped always in a cape made of fox-skins, he wandered about the castle, rendered justice among his vassals and settled his neighbours' quarrels. In the winter, he gazed dreamily at the falling snow, or had stories read aloud to him. But as soon as the fine weather returned, he would mount his mule and sally forth into the country roads, edged with ripening wheat, to talk with the peasants, to whom he distributed advice. After a number of adventures he took unto himself a wife of high lineage.

She was pale and serious, and a trifle haughty. The horns of her head-dress touched the top of the doors and the hem of her gown trailed far behind her. She conducted her household like a cloister. Every morning she distributed work to the maids, supervised the making of preserves and unguents, and afterwards passed her time in spinning, or in embroidering altar-cloths. In response to her fervent prayers, God granted her a son!

Then there was great rejoicing; and they gave a feast which lasted three days and four nights, with illuminations and soft music....