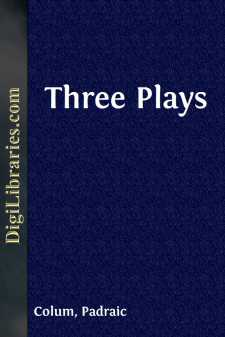 ACT I SCENE: The interior of a farmer's cottage; the kitchen. The entrance is at the back right. To the left is the fire-place, an open hearth, with a fire of peat. There is a room door to the right, a pace below the entrance; and another room door below the fire-place. Between the room door and the entrance there is a row of wooden pegs, on which men's coats hang. Below this door is a dresser containing pretty delpht. There is a small window at back, a settle bed folded into a high bench; a small mirror hangs right of the window. A backed chair and some stools are about the hearth. A table to the right with cloth and tea things on it. The cottage looks pretty and comfortable. It is towards the close of an Autumn day.

James Moynihan has finished tea; Anne Hourican is at the back, seated on the settle knitting, and watching James. James Moynihan is about twenty-eight. He has a good forehead, but his face is indeterminate. He has been working in the fields, and is dressed in trousers, shirt, and heavy boots. Anne Hourican is a pretty, dark-haired girl of about nineteen.

ANNEAnd so you can't stay any longer, James?

JAMES (with a certain solemnity) No, Anne. I told my father I'd be back while there was light, and I'm going back. (He goes to the rack, takes his coat, and puts it on him) Come over to our house to-night, Anne. I'll be watching the girls coming in, and thinking on yourself; there's none of them your match for grace and favour. My father wanted me to see a girl in Arvach. She has three hundred pounds, besides what the priest, her uncle, will leave her. "Father," says I, "listen to me now. Haven't I always worked for you like a steady, useful boy?" "You have," says he. "Did I ever ask you for anything unreasonable?" says I. "No," says he. "Well then," says I, "don't ask me to do unreasonable things. I'm fond of Anne Hourican, and not another girl will I marry. What's money, after all?" says I, "there's gold on the whin-bushes if you only knew it." And he had to leave it at that.

JAMESThe quiet, reasonable way is the way that people like.

ANNEStill, with all, I'm shy of going into your house.

JAMES Don't doubt but there'll be a welcome before you; come round with Maire.

Anne rises, and comes to him. She has graceful, bird-like movements.

ANNE (putting her hands on James' shoulders) Maybe we won't have a chance of seeing each other after all.

JAMES Sit down now, Anne, because there's something I want to show you. Do you ever see "The Shamrock"?

James and Anne go to the settle; they sit down.

JAMES There be good pieces in it sometimes. There's a poem of mine in it this week.

ANNEOf yours, James? Printed, do you mean?

JAMESAy, printed. (He takes a paper out of his pocket, and opens it)It's a poem to yourself, though your name doesn't come into it.(Gives paper) Let no one see it, Anne, at least not for the present.And now, good-bye....