Thoughts out of Season Part I 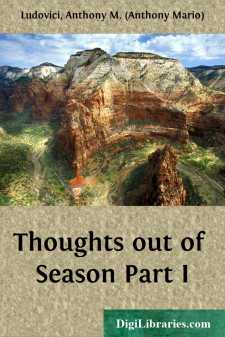 THE Editor begs to call attention to some of the difficulties he had to encounter in preparing this edition of the complete works of Friedrich Nietzsche. Not being English himself, he had to rely upon the help of collaborators, who were somewhat slow in coming forward. They were also few in number; for, in addition to an exact knowledge of the German language, there was also required sympathy and a certain enthusiasm for the startling ideas of the original, as well as a considerable feeling for poetry, and that highest form of it, religious poetry.

Such a combination—a biblical mind, yet one open to new thoughts—was not easily found. And yet it was necessary to find translators with such a mind, and not be satisfied, as the French are and must be, with a free though elegant version of Nietzsche. What is impossible and unnecessary in French—a faithful and powerful rendering of the psalmistic grandeur of Nietzsche —is possible and necessary in English, which is a rougher tongue of the Teutonic stamp, and moreover, like German, a tongue influenced and formed by an excellent version of the Bible. The English would never be satisfied, as Bible-ignorant France is, with a Nietzsche à l'Eau de Cologne—they would require the natural, strong, real Teacher, and would prefer his outspoken words to the finely-chiselled sentences of the raconteur. It may indeed be safely predicted that once the English people have recovered from the first shock of Nietzsche's thoughts, their biblical training will enable them, more than any other nation, to appreciate the deep piety underlying Nietzsche's Cause.

As this Cause is a somewhat holy one to the Editor himself, he is ready to listen to any suggestions as to improvements of style or sense coming from qualified sources. The Editor, during a recent visit to Mrs. Foerster-Nietzsche at Weimar, acquired the rights of translation by pointing out to her that in this way her brother's works would not fall into the hands of an ordinary publisher and his staff of translators: he has not, therefore, entered into any engagement with publishers, not even with the present one, which could hinder his task, bind him down to any text found faulty, or make him consent to omissions or the falsification or "sugaring" of the original text to further the sale of the books. He is therefore in a position to give every attention to a work which he considers as of no less importance for the country of his residence than for the country of his birth, as well as for the rest of Europe.

It is the consciousness of the importance of this work which makes the Editor anxious to point out several difficulties to the younger student of Nietzsche. The first is, of course, not to begin reading Nietzsche at too early an age. While fully admitting that others may be more gifted than himself, the Editor begs to state that he began to study Nietzsche at the age of twenty-six, and would not have been able to endure the weight of such teaching before that time. Secondly, the Editor wishes to dissuade the student from beginning the study of Nietzsche by reading first of all his most complicated works. Not having been properly prepared for them, he will find the Zarathustra abstruse, the Ecce Homo conceited, and the Antichrist violent. He should rather begin with the little pamphlet on Education, the Thoughts out of Season, Beyond Good and Evil, or the Genealogy of Morals. Thirdly, the Editor wishes to remind students of Nietzsche's own advice to them, namely: to read him slowly, to think over what they have read, and not to accept too readily a teaching which they have only half understood....