Thoughts on the Present Discontents, and Speeches, etc. 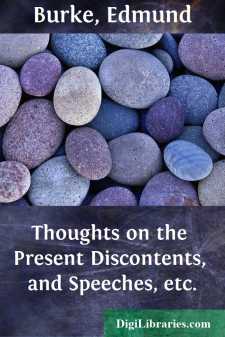 Edmund Burke was born at Dublin on the first of January, 1730.  His father was an attorney, who had fifteen children, of whom all but four died in their youth.  Edmund, the second son, being of delicate health in his childhood, was taught at home and at his grandfather’s house in the country before he was sent with his two brothers Garrett and Richard to a school at Ballitore, under Abraham Shackleton, a member of the Society of Friends.  For nearly forty years afterwards Burke paid an annual visit to Ballitore.

In 1744, after leaving school, Burke entered Trinity College, Dublin.  He graduated B.A. in 1748; M.A., 1751.  In 1750 he came to London, to the Middle Temple.  In 1756 Burke became known as a writer, by two pieces.  One was a pamphlet called “A Vindication of Natural Society.”  This was an ironical piece, reducing to absurdity those theories of the excellence of uncivilised humanity which were gathering strength in France, and had been favoured in the philosophical works of Bolingbroke, then lately published.  Burke’s other work published in 1756, was his “Essay on the Sublime and Beautiful.”

At this time Burke’s health broke down.  He was cared for in the house of a kindly physician, Dr. Nugent, and the result was that in the spring of 1757 he married Dr. Nugent’s daughter.  In the following year Burke made Samuel Johnson’s acquaintance, and acquaintance ripened fast into close friendship.  In 1758, also, a son was born; and, as a way of adding to his income, Burke suggested the plan of “The Annual Register.”

In 1761 Burke became private secretary to William Gerard Hamilton, who was then appointed Chief Secretary to Ireland.  In April, 1763, Burke’s services were recognised by a pension of £300 a year; but he threw this up in April, 1765, when he found that his services were considered to have been not only recognised, but also bought.  On the 10th of July in that year (1765) Lord Rockingham became Premier, and a week later Burke, through the good offices of an admiring friend who had come to know him in the newly-founded Turk’s Head Club, became Rockingham’s private secretary.  He was now the mainstay, if not the inspirer, of Rockingham’s policy of pacific compromise in the vexed questions between England and the American colonies.  Burke’s elder brother, who had lately succeeded to his father’s property, died also in 1765, and Burke sold the estate in Cork for £4,000.

Having become private secretary to Lord Rockingham, Burke entered Parliament as member for Wendover, and promptly took his place among the leading speakers in the House.

On the 30th of July, 1766, the Rockingham Ministry went out, and Burke wrote a defence of its policy in “A Short Account of a late Short Administration.”  In 1768 Burke bought for £23,000 an estate called Gregories or Butler’s Court, about a mile from Beaconsfield.  He called it by the more territorial name of Beaconsfield, and made it his home.  Burke’s endeavours to stay the policy that was driving the American colonies to revolution, caused the State of New York, in 1771, to nominate him as its agent.  About May, 1769, Edmund Burke began the pamphlet here given, Thoughts on the Present Discontents.  It was published in 1770, and four editions of it were issued before the end of the year.  It was directed chiefly against Court influence, that had first been used successfully against the Rockingham Ministry.  Allegiance to Rockingham caused Burke to write the pamphlet, but he based his argument upon essentials of his own faith as a statesman.  It was the beginning of the larger utterance of his political mind....