Thoughts on Educational Topics and Institutions 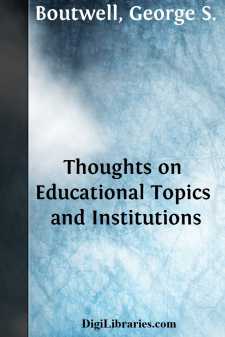 Words and terms have, to different minds, various significations; and we often find definitions changing in the progress of events. Bailey says learning is "skill in languages or sciences." To this, Walker adds what he calls "literature," and "skill in anything, good or bad." Dr. Webster enlarges the meaning of the word still more, and says, "Learning is the knowledge of principles or facts received by instruction or study; acquired knowledge or ideas in any branch of science or literature; erudition; literature; science; knowledge acquired by experience, experiment, or observation." Milton gives us a rhetorical definition in a negative form, which is of equal value, at least, with any authority yet cited. "And though a linguist," says Milton, "should pride himself to have all the tongues that Babel cleft the world into, yet if he have not studied the solid things in them, as well as the words and lexicons, he were nothing so much to be esteemed a learned man, as any yeoman or tradesman competently wise in his mother dialect only."—"Language is but the instrument conveying to us things useful to be known."

This is kindred to the saying of Locke, that "men of much reading are greatly learned, but may be little knowing." We must give to the term learning a broad definition, if we accept Milton's statement that its end "is to repair the ruins of our first parents by regaining to know God aright;" for this necessarily implies that we are to study carefully everything relating to the nature of our existence, to the spot and scene of our existence, with its mysterious phenomena, and its comparatively unexplained laws. And we must, moreover, always keep in view the personal relations and duties which the Creator has imposed upon the members of the human race. The knowledge of these relations and duties is one form of learning; the disposition and the ability to observe and practise these relations and duties, is another and a higher form of learning. The first is the learning of the theologian, the schoolman; the latter is the learning of the practical Christian. Both ought to exist; but when they are separated, we place things above signs, facts above forms, life above ideas. Law and justice ought always to be united; but when by error, or fraud, or usurpation, they are separated, we observe the forms of law, but we respect the principles of justice. This is a good illustration of the principles which guide to a true distinction in the forms of learning. Of all the definitions enumerated, we must give to the word learning the broadest signification. It is safe to accept the statement of the great poet, that a man may be acquainted with many languages, and yet not be learned; even as the apostle said he should become as sounding brass or a tinkling cymbal, if he had not charity, though he spoke with the tongues of men and angels. Learning includes, no doubt, a knowledge of the languages, the sciences, and all literature; but it includes also much else; and this much else may be more important than the enumerated branches. The term learned has been limited, usually, by exclusive application to the schoolmen; but it is a matter of doubt, especially in this country, upon the broad definition laid down, whether there is more learning in the schools, or out of them. This remark, if true, is no reflection upon the schools, but much in favor of the world. Those were dark ages when learning was confined to the schools; and, though we can never be too grateful for their existence, and the fidelity with which they preserved the knowledge of other days, that is surely a higher attainment in the life of the race, when the learning of the world exceeds the learning of the cloister, the school, and the college.

In a private conversation, Professor Guyot made a remark which seems to have a public value. "You give to your schools," said he, "credit that is really due to the world. Looking at America with the eye of an European, it appears to me that your world is doing more and your schools are doing less, in the cause of education, than you are inclined to believe." For one, though I ought, as much as any, to stand for the schools, I give a qualified assent to the truth of this observation....